Thembela in the wind

“Haai, Thembela!” calls Mama. “It’s too windy to be outside. Come in or you’ll catch a cold.”

But Thembela doesn’t listen because she’s having too much fun. Her hair lifts up-up-up above her head, and now it’s flapping all around her ears. Her dress feels like a kite and Thembela is sure that if she wanted to, she could fly away − right into the sky.

“The wind is wonderful, Mama,” she laughs. “I don’t want to come inside.” 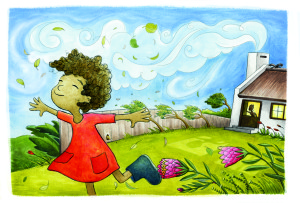 “You have to, Thembela,” replies Mama. “It’s no good out there − too dangerous.”

Thembela lifts her arms out to her sides and flaps them up and down like a bird. “Okay, okay,” she smiles. “I’ll come inside.”

And with that, she takes a jump. Off she goes across the garden and she feels like she’s flying. The wind wraps itself around her and carries her all the way back to Mama, who closes the door behind her.

“Shoo, Thembela! Aren’t you tired from all that flying? Why don’t you take a warm bath and then it’s straight to bed.”

When Mama comes to tuck Thembela in, she says, “Haai, Thembela, you must be the only person in the whole world who likes the wind.” Before Mama leaves, Thembela asks for the curtains to be opened so that she can watch the clouds as they sail on by and the tops of the trees as they sway here-and-there. She kisses her Mama goodnight and falls asleep.

That weekend, Mama has to go into the city, so Aunt Ida comes over to stay.

“Oh my,” says Aunt Ida with a great, big sigh, “I heard on the news that there’s a storm on the way!”

All day long the clouds gather in the sky until it’s as dark as night. Then the rain starts to fall. Thembela can’t believe her eyes. It’s more rain than she has ever seen and soon there are big puddles everywhere. But Thembela smiles. She pulls on her raincoat and puts on her gumboots and out she goes.

But Thembela doesn’t listen because she’s having too much fun. She laughs as the wind blows through her raincoat and fills up her hood like a big balloon. “If I lift my arms,” she giggles, “I could fly!”

Then Aunt Ida runs out in her pink dressing gown and carries Thembela back inside. “No one likes the wind,” says Aunt Ida. “It’s loud and it’s cold and it’s just not nice.”

When Aunt Ida comes to tuck her in, Thembela asks for the curtains to be opened so that she can watch the trees sway and the clouds sail by. But Aunt Ida says, “No! Definitely no, and no again!” She closes the curtains. “Now let’s just hope the house doesn’t float away with all this rain,” says Aunt Ida with a shiver.

Thembela hears the boom of thunder and the drumming of rain on the roof. Now the wind blows on the walls. It knocks on the door and rattles the windows. It howls down the chimney and gives Aunt Ida such a fright that she hides behind the couch. The roof creaks and the floorboards squeak and the trees whistle loudly. 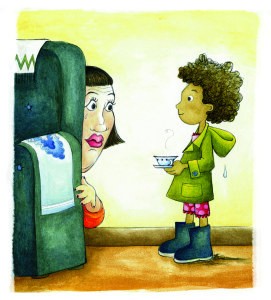 Aunt Ida cries out, “Oh dear, we’re all going to blow away!” But Thembela is not afraid. She jumps out of bed and runs downstairs. Quickly she pulls on her gumboots and grabs her umbrella, and then bravely she marches outside. The wind is howling and rolling and the rain is falling and thunder claps in the sky.

“It’s me, Wind,” says Thembela. “Why are you so angry? Do you really think that no one likes you? Now don’t be silly. You’re loud and you’re cold, but you’re so much fun − and I like you. I LIKE YOU WIND!”

Suddenly, the thunder stops and all the dark clouds are chased away. And in no time the rain has disappeared. When Thembela looks up, she sees that the sky is clear. The moon is full and all the stars are shining. Now the wind blows gently all around her, lifting up her umbrella and softly kissing her cheeks.

“Thank you, Wind,” says Thembela. “Thank you for chasing the rain away.”

Then Thembela turns around and walks back inside. She helps Aunt Ida up from behind the couch and makes her a warm cup of tea.

“Oh my,” says Aunt Ida, “I don’t like the wind at all.” But Thembela just smiles.