Malusi and the Bath Monster

Every word that follows is true − I promise. Cross my heart that I won’t lie, and if I do I’ll eat a fly!

My older sister, Zandi, and I like to play in the garden all day. We stamp around in the mud and dig deep holes. Forget shoes − bare feet are much better. You get to feel the mud squishing up between your toes. I love it!

Mama always says, “Ai, you two! Only pigs like mud that much.” Sometimes she worries that we’re getting too dirty. I see her shaking her head − but there’s always a smile on her face. Anyway, it’s okay because there’s nothing better than a warm bath after playing in the garden.

But Zandi is worse than me − much worse. I just get my hands and feet dirty. Zandi gets everything dirty. She jumps right into the holes and rolls around in the mud. She gets her hair dirty and her arms dirty. She even gets her nose dirty.

But Zandi won’t come inside. “Malusi,” she says to me, “I’m staying right here − in this hole!”

I tell her that she’ll have to come inside for a bath. Zandi just shakes her head. “You’re a very silly boy, Malusi,” she laughs.

Then Zandi walks in. She’s still all dirty − from the top of her head to the tips of her toes. She takes one look at me and gets a weird look on her face. “Malusi,” she says, “aren’t you scared of the Bath Monster?”

“There’s no such thing as a Bath Monster,” I laugh.

“Oh yes, there is,” says Zandi. “It comes up through the plug hole and has three arms and four eyes and it’s always hungry.” I think Zandi is just trying to scare me.

“And I’ll tell you something,” says Zandi, “there’s nothing the Bath Monster likes more than to eat cleanchildren. That’s why I’m not going to bath. That scary Bath Monster hates the taste of dirt.”

Okay, so now I’m just a little bit scared. Maybe there really is a Bath Monster.

Zandi gives me a big smile, “Okay, Malusi. Enjoy your bath − but don’t get eaten up!” She walks out of the bathroom and goes straight to bed. She’s going to make her bed all dirty, but at least she won’t be eaten by the Bath Monster. Eek!

“Don’t be scared, Malusi,” I say to myself. “There’s no such thing as a Bath Monster.”

And then it happens! At first there’s a soft gurgling sound − like water going down the drain. Then I hear a strange groaning and a loud rumbling. Then there is a squeaking and a squelching and a whoosh. And finally something shoots right up out of the plug hole: THE BATH MONSTER! 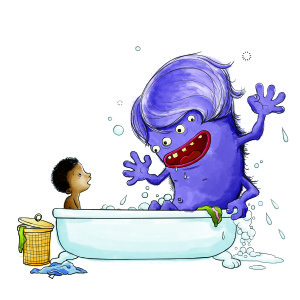 “Not at all,” laughs the Bath Monster. “I don’t mind eating soap and sponges every now and again − and I like to eat old socks − but I’d never eat a child.” Then the Bath Monster gives me a big smile. “And the Toilet Monster doesn’t like to eat children either. Neither does the Shower Monster. The only monster who does like to eat children, is the Bed Monster. But don’t worry, Malusi, it never eats clean children − only dirty ones, who go straight to bed without taking a bath!”

Oh, no! What about Zandi! Very quickly, I tell the Bath Monster all about my sister.

“There’s no time to waste,” says the Bath Monster. “Scoop up a glass of water and run as fast as you can to Zandi’s room.”

I get there just in time − the Bed Monster’s mouth is wide open. It’s about to swallow Zandi. “Go away, monster!” I shout. Then I throw the water all over my sister.

“Hooray!” shouts the Bath Monster. “The dirt is washed away. Now she’s clean and safe.”

That’s right. I saved Zandi from the Bed Monster! And this is exactly what I tell Mama when she asks me why I threw a glass of water on my sister. I don’t know if she believes me. But every word of it is true − I promise. Cross my heart that I won’t lie, and if I do I’ll eat a fly!