“We’re here!” shouted Josh as he saw Afrika and his mother.

“Now that you are here, what are you planning to do?” asked Mme wa Afrika once everyone had unpacked their bags.

“Today we’re going to feed the farm animals and collect eggs for you, Mme wa Afrika,” said Hope. “Tomorrow we’re all going to fly kites and on the last day, Josh would like to learn to bake bread in the outside oven.

“And I want to show Hope the water hole,” said Afrika.

Their first two days were busy and full of fun. On the third day Hope went to the water hole with Afrika, even though she really wanted to bake bread with Josh.

“We’ll be back at lunchtime,” said Hope as she and Afrika waved goodbye to everyone.

On their way they saw two hawks, some birds’ nests and a tiny mouse. Hope took photographs of them with her cellphone.

“The water hole is over there,” said Afrika pointing. “Let’s be really quiet and hide behind this bush.”

Afrika and Hope watched the birds drinking and bathing in the water. There was even a tiny buck drinking at the water’s edge.

Then suddenly Hope went cold all over. Something was moving in the bush behind her.

“Why are you whispering like that?” asked Afrika, still looking at the water hole.

“There’s something behind us and it’s getting closer,” Hope whispered urgently.

“Don’t be silly! There’s nothing dangerous around here,” said Afrika.

They ran between thorn trees and across the rocks. Afrika scrambled up a high tree and Hope followed. They could hear something following them.

“What is that?” Hope asked shaking and looking down from the safety of the tree. 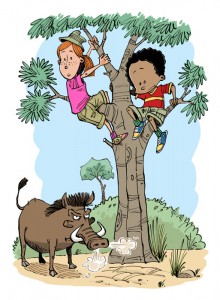 “Is it dangerous?” asked Hope.

The warthog stared up at them. Its tusks were big and curved. It sniffed the air and circled the tree grunting. Then it turned and went down on its knees.

“Now it’s looking for food. All we can do is wait and hope that it goes off soon,” said Afrika.

The children watched the warthog as it dug in the ground. After quite some time it disappeared into the bush.

“It feels like we’ve been up here for hours. Are you sure it’s gone?” asked Hope.

“I’m sure. Come on,” said Afrika as he climbed down, looked around and groaned.

“What’s wrong? Is it coming back?” Hope asked nervously.

“What could be worse than being chased by an angry warthog?” asked Hope.

“We’re lost,” said Afrika. “I didn’t look where we were running to … and … well you’d better phone my mother.”

Hope dug in her pocket for her cellphone. “It’s gone,” she said. “It must have fallen out while we were running. Now what? It’s getting late. Oh, I wish I had stayed and baked bread with Josh!”

Afrika took a deep breath. “We’ll have to look for our footprints. When we find them, we can follow them back to the water hole.” Then he looked around. “Oh no! The ground we ran across is hard and so there won’t be any footprints!” he said.

“We’ll just walk in a circle until we find something,” said Hope and she started to walk. “Here!” she shouted. “Here’s something.”

Afrika looked at the prints. “No,” he said, “those are not our footprints. Keep walking.”

“But Afrika, they can help. I think those are buck prints. Don’t you remember? We saw a small buck at the water hole.” 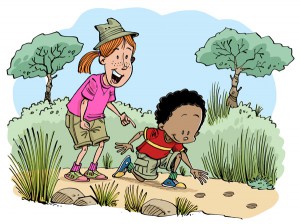 “Oh, yes!” said Afrika. “We can follow them back to the water hole. We’d better hurry because I’m sure everyone at home is getting worried about us.”

What they didn’t expect to find at the water hole was Mme wa Afrika and Hope’s mother!

“You’re a bit late,” said Mme wa Afrika getting out of the car. “We were worried. In you get, let’s go.”

“I hope you two have a good story,” said Hope’s mother, starting the car. “You’ve got a lot of explaining to do.”

Hope and Afrika looked at each other.

“By the way,” said Mme wa Afrika, “I just saw an angry warthog. Luckily you didn’t bump into it. That could have been really dangerous!” Then after a bit she said, “Oh, Hope, look what I found lying near a bush at the water hole.” She handed Hope her cellphone. “It’s a pity it wasn’t in your pocket, you could have phoned to let us know you were going to be late.”

Hope looked at Afrika again and they both burst out laughing.

“Mmm,” said Mme wa Afrika. “It looks like you have a good holiday story to tell, Hope.”

Encourage your children to write or tell their own holiday adventure stories – real or imaginary!