A salad with eight colours

“Thank you, my darlings,” Mom said, putting the earrings away safely in the jewellery box on her dressing table. “I have to hurry now or I’ll be late at the hairdresser. I’m having my hair done so I can look extra special for my party tonight.”

“Okay, Gogo,” said Neo. But he wasn’t really listening. He had a new book from the library all about two boys who sail the seas on a pirate ship.

“Neo,” called Gogo after a while, “what is Mbali doing?”

Neo jumped up. He had forgotten all about his little sister. Where was she? He could hear her singing to herself. She had Mom’s jewellery box open and she was wearing all Mom’s necklaces and rings and bracelets. 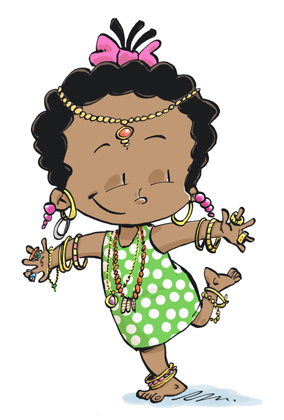 Mbali started crying, so Neo quickly packed away all the necklaces, rings and bracelets. Then he picked up his little sister and carried her to the kitchen.

Gogo was very busy. She was watching a pretty lady called Siba on the TV. Siba was making something called a seven colour salad.

“Why is it called a seven colour salad?” Neo asked.

“Red’s my favourite colour,” said Neo, nibbling on a piece of bacon. 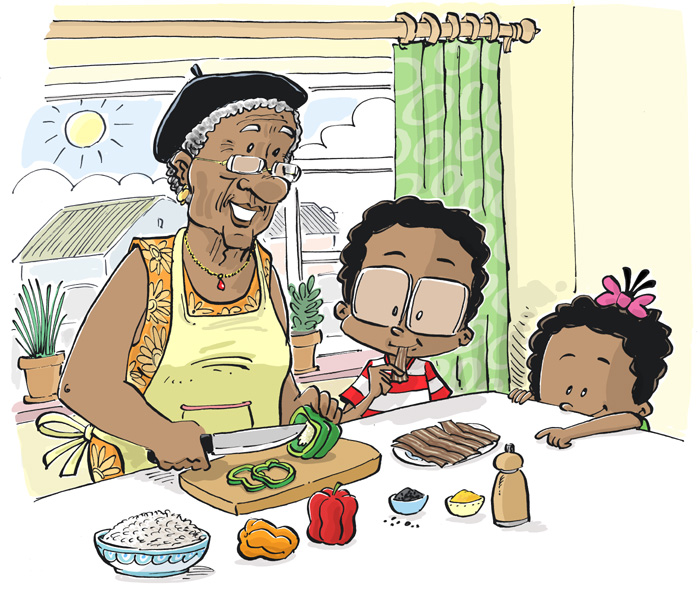 Soon the salad was finished. Gogo put it on the table and covered it with a cloth. “I’m quickly going next door to ask Mrs Mthembu if she can lend me a cup of sugar. Neo, you watch your sister. Make sure she doesn’t touch anything.”

“Bring all your teddies here,” Neo said to Mbali. “Then you can play with them while I read my book.”

Mbali trotted off to her bedroom and brought out all her teddies. Neo helped her line them up on the couch and cover them with a blanket so she could put them to sleep. Then he picked up his book and started to read again.

Suddenly Neo looked up. Mbali wasn’t singing anymore. Where was she? He checked all the rooms. There she was, in the kitchen, standing on one of the chairs. She was eating Gogo’s seven colour salad. 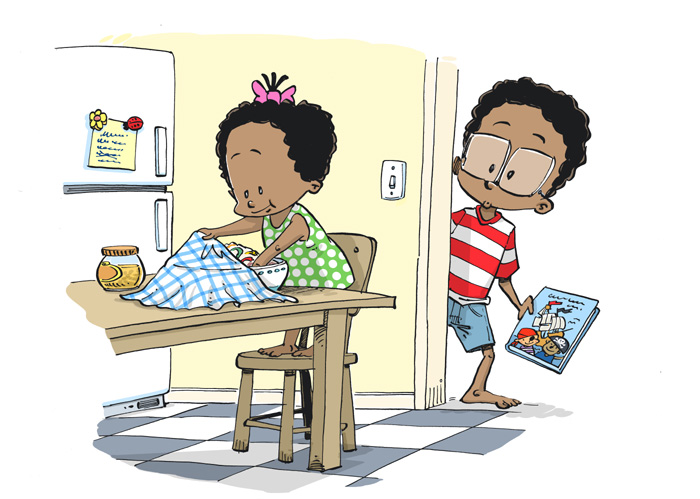 Quickly he took a spoon and smoothed over the top of the salad and put the cloth back neatly. It looked as good as new. Eish! That was close.

By five o’clock everything was ready. Mom had got back from the salon and her hair looked beautiful. Neo had helped Dad light the fire for the braai and Gogo had bathed Mbali and dressed her in her prettiest party dress.

Suddenly there was a loud shriek from Neo’s parents’ bedroom, “My new earrings are gone!”

Neo hurried to the bedroom. Mom was nearly in tears. “I put them here,” she wailed. “I put them in my jewellery box just this morning, and now they’re gone! We must have had a burglary!”

“Oh dear,” said Neo. “Mbali was playing with your rings and necklaces this morning, but I put everything away neatly, I promise.”

Mbali’s bottom lip began to trembled and she looked down at the ground.

“Where are my earrings?” asked Mom. Mbali started to cry.

“I told you to watch your sister, Neo,” said Gogo. “You know she’s not allowed to play with your Mom’s things.”

Neo felt terrible. He hung his head. “I’m really sorry, Mom,” he murmured. Now Mom’s birthday was spoilt and it was all his fault.

He looked everywhere for the other pink earring – under the dressing table, under the bed, in Mom’s drawer. He even checked Mbali’s bed and her doll’s pram, but he couldn’t find it anywhere. Mom was very sad – she couldn’t wear only one earring.

Just then the doorbell rang. Their friends had arriving for the party. Mom put on her old blue earrings and she put a smile on her face and went to say hello to everyone who had come to wish her a happy birthday. Dad put the sausage on the braai and soon everyone was laughing and talking.

Neo could see that Mom was still sad. “I wish I’d watched Mbali better,” he thought as he helped Gogo carry the salads outside to the big table.

“Let’s eat,” said Dad. “It all looks delicious. Thank you, Gogo for making such wonderful food.”

“She learnt how to make the seven colour salad from a lady on TV,” said Neo. “There’s white rice, and green and red and orange peppers, and brown bacon, and yellow curry powder, and black pepper in it.”

She scooped a big serving onto her plate and took a mouthful. Suddenly she stopped chewing. Her eyes grew big and round. Something was wrong!

Mom put her hand into her mouth and pulled something out. “My earring!” she cried. “Here’s my lost earring.” 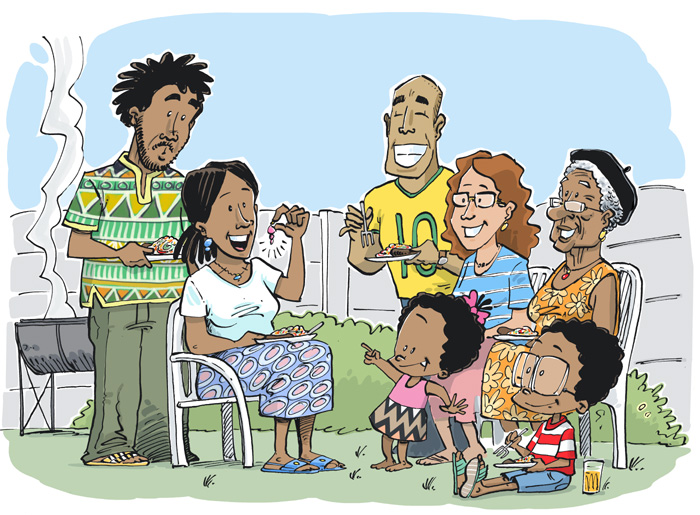 “Mbali put your earring in the salad,” giggled Neo. “She was sad because the salad didn’t have her favourite colour in it.”

“I think tonight we will have to call it an eight colour salad,” smiled Gogo.

Everybody laughed, even Mbali who was holding Mom’s pink earring.

* With your children, look on the internet or in a cookbook for a recipe for something none of you has ever tried to make before. Together check what ingredients you will need and then read and follow the steps in the recipe. Or, create a new dish together by combining ingredients you have at home. Then write down the recipe so that you can make it again later or share it with others.