Gus was a big gorilla. He lived in the zoo with another gorilla called Gabby. Gus and Gabby had a little house to sleep in and a lovely garden to play in.

The zookeeper was good to Gus and Gabby. He gave them plenty of food to eat − cabbage and pumpkin and beans and mealies, and lots of oranges and paw-paws and apples and … bananas! Gus and Gabby loved bananas more than any other food!

One day, not far from the zoo, Mr van Vliet, the shopping bag thief, grabbed a shopping bag full of food from Gogo who was on her way to the taxi rank.

“Help! Help! Give me back my shopping bag!” shouted Gogo. But Mr van Vliet took no notice of her, and ran off down the road.

Gogo ran up to a policeman standing on the street corner. “Help!” she cried. “That man has snatched my shopping bag!”

“Let’s catch him!” said the policeman, and they both ran after Mr van Vliet.

Mr van Vliet saw them coming, so he jumped over a big gate, and landed in the grounds of the zoo.

“Look!” puffed Gogo. “The thief has run into the zoo!”

“Let’s catch him!” puffed the policeman.

Mr van Vliet was not looking where he was going. He jumped over a wall and fell right onto a thorn bush in Gus and Gabby’s garden.

The noise woke Gus and Gabby, who were having an afternoon nap.

“I think somebody is bringing us bananas!” said Gus.

So they went up to Mr van Vliet. Gus was a very gentle gorilla with good manners. When he saw Mr van Vliet, he stood up on his back legs and beat his chest like a drum to greet him. 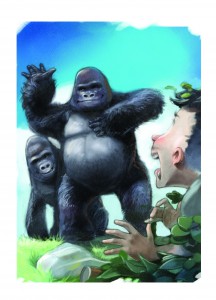 When Mr van Vliet saw Gus do this, he got a terrible fright. He grabbed the shopping bag and tried to climb back over the wall.

“Give me bananas!” said Gus. But Mr van Vliet was already halfway up the wall, so Gus pulled his leg and bit him on his bottom to get him down again.

Mr van Vliet fell back down onto the thorn bush. Gus picked up the shopping bag, and looked inside it. Gus threw out all Gogo’s shopping. And there, at the very bottom of the shopping bag was a big bunch of ripe, yellow bananas.

“Gabby,” said Gus, “this kind man has brought us a lovely bunch of bananas!” Gabby came dancing over to Gus. Together they sat down next to Mr van Vliet and ate up all the bananas. 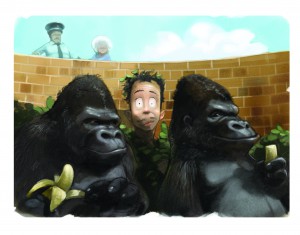 Gogo and the policeman heard the noise. They looked over the wall, and saw Mr van Vliet lying in the thorn bush.

“There is the thief!” said Gogo.

“Give Gogo her shopping bag!” said the policeman.

“Okay,” said a shocked Mr van Vliet. He pick up all the shopping and put it back in Gogo’s shopping bag. Then he reached over the wall and gave it back to Gogo.

“Hmmmph!” said Gogo. And she went off with her shopping bag to buy more bananas, and to catch a taxi home.

Mr van Vliet looked up at the policeman. “I promise I will never steal a shopping bag again!” he said. “But please, I must get away from here. Take me to the police station.”

“Well now, Gus,” said the policeman. “You have caught the famous shopping bag thief! I am taking Mr van Vliet to the police station now, but I will be back to see you tomorrow morning!”

The next morning the policeman brought the Chief of Police and a big brass band and a camera man and a news reporter to the zoo. A crowd of people followed them. The zookeeper led them all into Gus and Gabby’s garden.

“Welcome to the police force, Gus,” said the Chief of Police. “You are now a policeman!” The brass band played a tune, the camera man took pictures of Gus, and the reporter wrote a story about Gus and the famous shopping bag thief. The crowd of people cheered. Then the Chief of Police handed Gus a lovely big bunch of yellow bananas.

“Thank you,” said Gus. “It was really quite easy to catch the shopping bag thief.” He was so happy, he stood up on his back legs and beat his chest. At this all the people hurried from Gus and Gabby’s garden as quickly as they could.

Gus and Gabby settled down to eat the bananas. “Now that I am a policeman, I will have plenty of work to do!” said Gus.

“Yes,” said Gabby proudly. “This time you may have the last banana, Gus.”

“Thank you, Gabby,” said Gus as he tucked into the last banana.

After reading the story, suggest that your children do some of these things: decide whether the thief got what he deserved and whether he should have been made to pay for Gogo’s bananas; write the article that they think might have appeared in the newspaper; act out the story.