Tortoise and the birds

A long time ago, when a bird died on earth, its spirit would leave its body and float up to the clouds where it lived as a cloud person, watching over and caring for the birds and animals on earth.

The birds and animals knew about these cloud people.

There came a time when there had been no rain for a whole year. The grass died, the water holes dried up and the animals were starving. The animals and birds came together to decide what to do about the terrible drought. 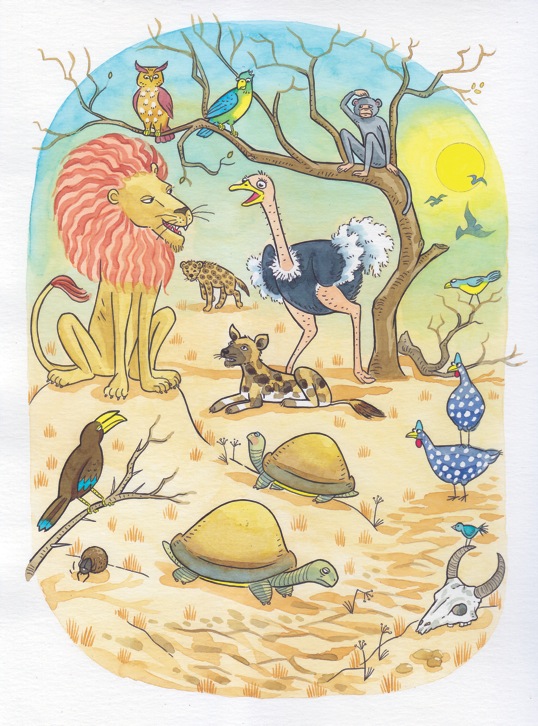 “I think we should eat the ostrich,” said Lion licking his lips.

“I think we should look for somewhere else to live,” said Monkey.

“There’s nowhere else to live,” yelped Wild dog. “The drought is everywhere.”

“We need to speak to the cloud people,” said Owl. “They will know what to do.”

Tortoise and his wife were also at the meeting. Tortoise was very worried. He knew that if the cloud people delivered food to earth, he might be too slow to reach it in time. He was hungry and didn’t want to miss out.

“Ahem,” he said. “Do you really think that the cloud people will pay attention to a flock of birds? They need a king to go with them. Somebody to give importance to our request. I shall be their king. I shall speak for all of us.”

The birds twittered amongst themselves. Eventually the birds agreed to take Tortoise along as their king.

Suddenly Hornbill scratched his head. “How do we get Tortoise up to the clouds?” he asked. Hyena laughed, and Monkey chattered. No one had thought of this problem. There were many ideas. Eventually Owl suggested that the birds could stick feathers onto Tortoise’s legs. If he had enough feathers he might be able to fly.

Tortoise looked ridiculous once all the feathers were stuck to his legs. Many of the animals wanted to laugh, but they knew that Tortoise was their last hope for survival. 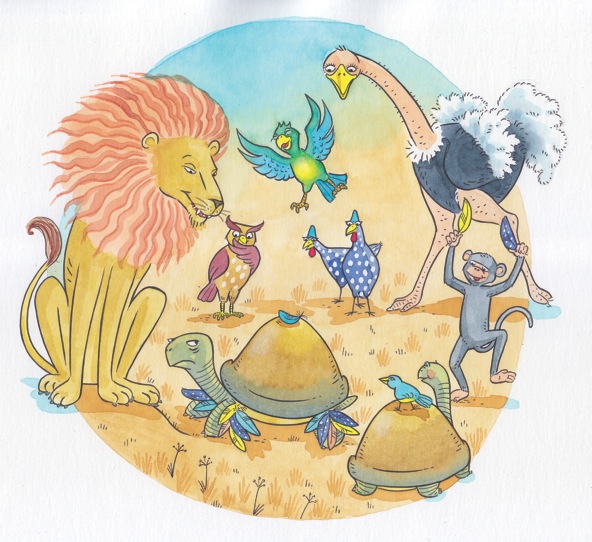 Everybody held their breath as Tortoise flapped his legs. Slowly he lifted off the ground and rose into the sky. The animals cheered and the birds sang as Tortoise rose higher and higher towards the clouds.

When Tortoise and the birds arrived in the clouds, the cloud people were happy to see the birds, and proud that they had chosen to bring their king with them. The cloud people prepared a feast – juicy fruits and tasty vegetables that the birds hadn’t seen for a long time.

“Who is this food for?” asked one of the birds excitedly.

“Why, it’s for all of you,” said the cloud people.

Tortoise wasted no time. He rushed forward greedily and ate every last morsel of food, while the birds watched him. The cloud people were amazed that the birds were not eating, but they thought that it was the birds’ custom to allow their king to eat first.

The birds were very angry and very hungry! They rushed towards Tortoise and pulled out all of his feathers. Then they flew back to earth to tell the other animals about Tortoise’s trick.

Tortoise’s feathers fluttered down to earth and he found himself stranded in the clouds. He looked around in desperation. If he jumped down to earth he would surely die. Suddenly he noticed Parrot scratching around looking to see if he could find a morsel of food that Tortoise had missed.

“Please, Parrot,” begged Tortoise, “tell my wife to build a big pile of leaves for me so that I can jump down from the clouds and not be smashed to death when I land on the hard ground.”

Parrot was angry with Tortoise for eating all the food. When he got back to earth he told Tortoise’s wife that her husband had asked her to build a pile of rocks for him to land on.

Tortoise’s wife built the pile of rocks. Tortoise looked down from the sky and saw his wife standing next to something. He guessed it was a pile of leaves, so he closed his eyes, held his breath and jumped. 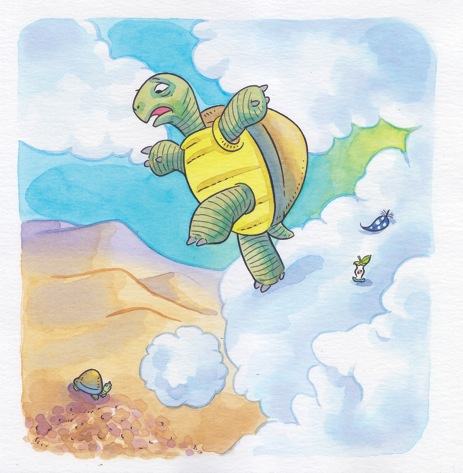 His little round body fell down to earth and landed heavily on the rocks. He cried out as his shell was smashed.

Tortoise’s wife rushed to his side and stared in horror at the damage to her husband’s beautiful shell. She nursed him and cared for him until eventually he healed, but the cracks in his shell remained as scars forever – a sign of what he had done to the poor birds.

Meanwhile, the cloud people were sad when they saw how the birds had been tricked. They wailed and they cried, and their tears fell down from the sky and watered the earth like rain. The grass and the trees grew again and once again the birds and animals had food. But the birds never trusted any of the tortoises again, and to this day, tortoises hide their heads inside their shells in shame when they see a bird.

* Ask your children, “How would the story have been different if Tortoise had shared the cloud people’s food with the birds?” Then encourage them to retell the story changing it in this way.

* Tortoise feels ashamed at the end of the story, so he must have learnt something from what happened! Invite your children to draw a picture of Tortoise and to then write and complete the following sentence in a speech bubble next to their picture: I learnt that I …