There is no price for being kind

In a village far away, there lived a very poor boy who herded sheep to feed his family. He was always kind and helpful to his neighbours and was a blessing to his grandparents who raised him from a little boy. His name was Thabo and he was loved by everyone.

“Aah! Thank you, Thabo, for going to the shop for my bread,” Mrs Abbas said. “You can keep the change.” 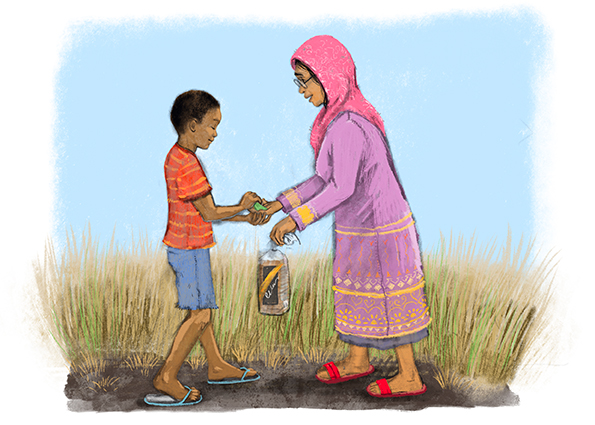 But Thabo knew that Mrs Abbas needed every cent she had. “That’s all right, Mrs Abbas,” he said, smiling. “There is no price for being kind.”

One day, the farmer who Thabo worked for arrived home with his nephew Simphiwe. Simphiwe was dressed in smart clothes and spoke English fluently.

“Thabo, come and meet Simphiwe,” said the farmer. “Simphiwe lives in the city but will be visiting us for a while. I hope that you two will get along and be company for each other.” Thabo was excited to meet someone his age. Hopefully, they would become good friends.

But Thabo’s excitement soon turned to sadness. As it turned out, Simphiwe was rude and arrogant. He showed no respect for his uncle or any of the other workers on the farm. “These people are so old-fashioned,” Simphiwe said, laughing loudly at the men who rode to work and back home on donkey carts. “And why would anyone choose to live here in the middle of nowhere, anyway?”

Simphiwe also refused to help out with the daily chores on the farm. “I’m a well-educated person. Do you think I go to school just to end up doing manual labour? I’m not going to do any of these chores!”

Rather than helping, Simphiwe spent his days lazing under a tree, refusing to help prepare the breakfast or lunch or to do any of the chores. Thabo was very disappointed that a boy his age could be so lazy and unkind. “I attend the local village school. There we are taught the value of kindness and hard work. Simphiwe hasn’t learnt these basic things,” thought Thabo. “He is foolish to think that he can go through life like this.”

One day, Simphiwe was bored and decided that he would like to go for a walk in the bush surrounding the farm. Everyone warned him that this was dangerous, as there were stray dogs living in the bush. They were always hungry and not friendly at all! But Simphiwe just laughed. “What do you know?” he said rudely. “I’m smart enough to look after myself.”

Thabo had gone out with the farmer to buy supplies. When he got back, the workers told him that Simphiwe had decided to go for a walk in the bush all by himself. Thabo immediately grabbed a stick and a box of matches and ran to look for Simphiwe.

“He doesn’t realise how much danger he is in,” Thabo whispered to himself while moving through the bush as quickly as possible. “The others told me to leave the rude city boy to learn a lesson, but I don’t want anything bad to happen to Simphiwe. Soon it will be dark, and the bush is a dangerous place, especially for a boy like Simphiwe who has never been out of the city before.”

Thabo had been searching for a long time when suddenly he heard a scream that jolted him. He ran in the direction of the scream and saw Simphiwe in the middle of a pack of stray dogs. The dogs were baring their sharp teeth and getting ready to pounce. Thabo had to think fast. He lit the stick that he had brought and charged at the dogs.

For a while, the dogs still threatened to attack the boys, but eventually they turned around and trotted away. 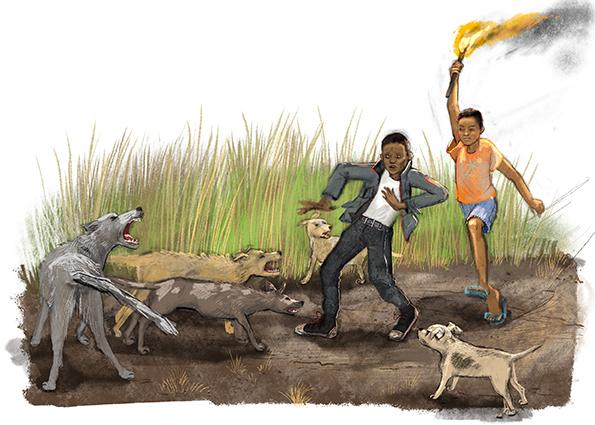 Simphiwe was shivering with fear. He had twisted his ankle trying to run away from the dogs and was limping in pain. Thabo was strong from all the hard work on the farm, so he carried Simphiwe all the way back to the farm.

Simphiwe was back on his feet a few days later, but something was different about him. He was kinder and less boastful. He was quieter and more respectful to his uncle and all the workers. When he saw Thabo, he thanked him for saving his life and offered him his cellphone as a token of his appreciation, but Thabo refused to accept this gift. He just smiled and said, “There is no price for being kind,” and carried on washing the donkey cart.

The learning board is a fun tool to help children learn new words when reading a story, by translating words from and/or to English, Afrikaans, Sepedi, Sesotho, Xhosa, Xitsonga and Zulu. Children can also look up the meaning of English words. Caregivers, teachers and ECD practitioners can track the number of new words learnt if they insert their details.

Step 01: Add your personal details on the learning board form and click on “Let’s get started”

Step 02: Highlight the words you want to get the translation/ meaning for in the story.

Step 03: A pop-up with the word translation will come up and you can indicate whether you understood the word.