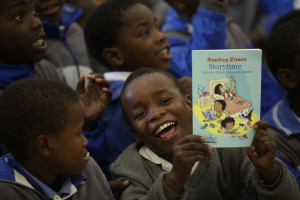 The Sunday Times, in partnership with PRAESA (The Project for the Study of Alternative Education in South Africa), launched the new Sunday Times Nal’ibali Storybook today (16 May 2013). Attended by the Western Cape Minister of Education, Donald Grant, the event celebrated ten new children’s stories commissioned by the Sunday Times and written by South African authors.

The illustrated stories will be printed in all our official languages, starting with English and followed with isiZulu and isiXhosa later this year. The storybooks are aimed at young children from Grade R to Grade 6 with the first  200 000 copies donated to schools, reading clubs, libraries and other NGO reading initiatives around the country.

The Sunday Times has already produced two such storybooks and distributed 2 million copies of these to schoolchildren nationwide. Having received a generous donation from Mrs Coralie Rutherford this year, Times Media has been able to commission a new book and incorporate it as part of a joint literacy initiative with PRAESA. The initiative, Nal’ibali, supports bilingual literacy development and encourages parents and children to engage with each other through reading and storytelling.

“We have been fortunate to work with a number of talented South African authors and illustrators in putting together this magical collection of stories. A treasured storybook can be just the thing to spark a love of reading in children and this is precisely our intention – to skill children to become readers for life,” comments Patti McDonald, publisher of Times Media Education’s supplements.

“Books and stories deepen our thinking and understanding by stretching our imagination while encouraging creative problem-solving. To have stories that our children can relate to in their home languages is an invaluable asset that we need to keep growing in our country,” comments Dr Carole Bloch, Director of PRAESA.

The Storybook launch, held at the Dalubuhle Primary School in Franschhoek, as part of the Franschhoek Literary Festival, was attended by the school’s pupils. It included a reading by Chris van Wyk of his contribution Mr Hare meets Mr Mandela in English and in isiXhosa by volunteer librarian Ms Siphokazi Mangwane.