Skip to main content
Home | Blog | Literacy Blog | Which stories should we read and retell to our children?

Which stories should we read and retell to our children? 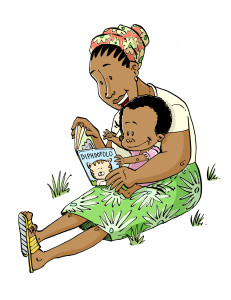 Stories travel – by word of mouth and in writing. Stories for children have been adapted over time from adult stories, often by translators, who have been responsible for crafting and shaping stories to suit their audiences across time and space. Think of Aesop’s Fables, told by Aesop, a slave and storyteller in Ancient Greece in the 5th century BC. Aesop’s Fables moved across continents for centuries, and were told and heard in many languages. They appeared in printed form for children in English only in 1484, and new versions continue to be created.

Famous fairytales have versions around the world – for example, the Grimm’s fairytale Hansel and Gretel has similar versions from African countries as well as from Russia, France, Italy, Portugal, Appalachia, India and Japan. This is not unique. The history of children’s literature is a history of translation – it is through translation that stories from Greek, Latin, Hebrew, French, Italian and Asian languages found their way into English.

African stories have been retold in many languages. People all over the world read the popular trickster tales about the crafty Hare, Tortoise or Spider. These stories are found in many cultural traditions in Africa and are used to portray human strengths and weaknesses. Animals with human features entertain and instruct, conveying wisdom and understandings about human nature and behaviour. In South Africa, Pinocchio, originally written in Italian, has became Pinokiyo in isiXhosa and is now appreciated by children who do not necessarily know that the story came from Italy, a very different country. But, as citizens of the world, we are curious about each other and teach one another as we tell and retell our stories – they mark us as belonging to the human race.

Not enough storybooks for children exist yet in African languages, either as original writing or as translations. But there are some, and the numbers will grow as people take the time to get to know, choose, read and talk about storybooks with their children and request storybooks in their languages of choice.

Here are some guidelines to help you choose stories to read, tell and retell:

Remember which kinds of stories you appreciated as a child and which ones still shine in your memory. Think about what you loved about them. These same qualities are significant for children today.

As a general rule, look out for:

Dr Carole Bloch is the director of PRAESA (Project for the Study of Alternative Education in South Africa) at UCT.