Why monkeys live in trees

Lion was the king of the beasts. His loud roar made the leaves on the trees tremble. He spent his days hunting for food and sleeping in the sun. He was proud of his roar, and he was proud of his sharp teeth and claws, but he was most proud of his beautiful golden coat and mane.

One day as he drank from a pond, Lion noticed that his mane was looking rather patchy. “What’s this?” he grumbled to himself. He turned around and noticed a patch of hair missing from his golden back. Lion was very unhappy. It would not do for a lion to have no hair and no mane. He ran off to see Dr Tortoise to find out what could be done to save his coat.

“Hmmm,” said Dr Tortoise thoughtfully. “This is a terribly serious case of something, but I’m not sure what. Let me think …” 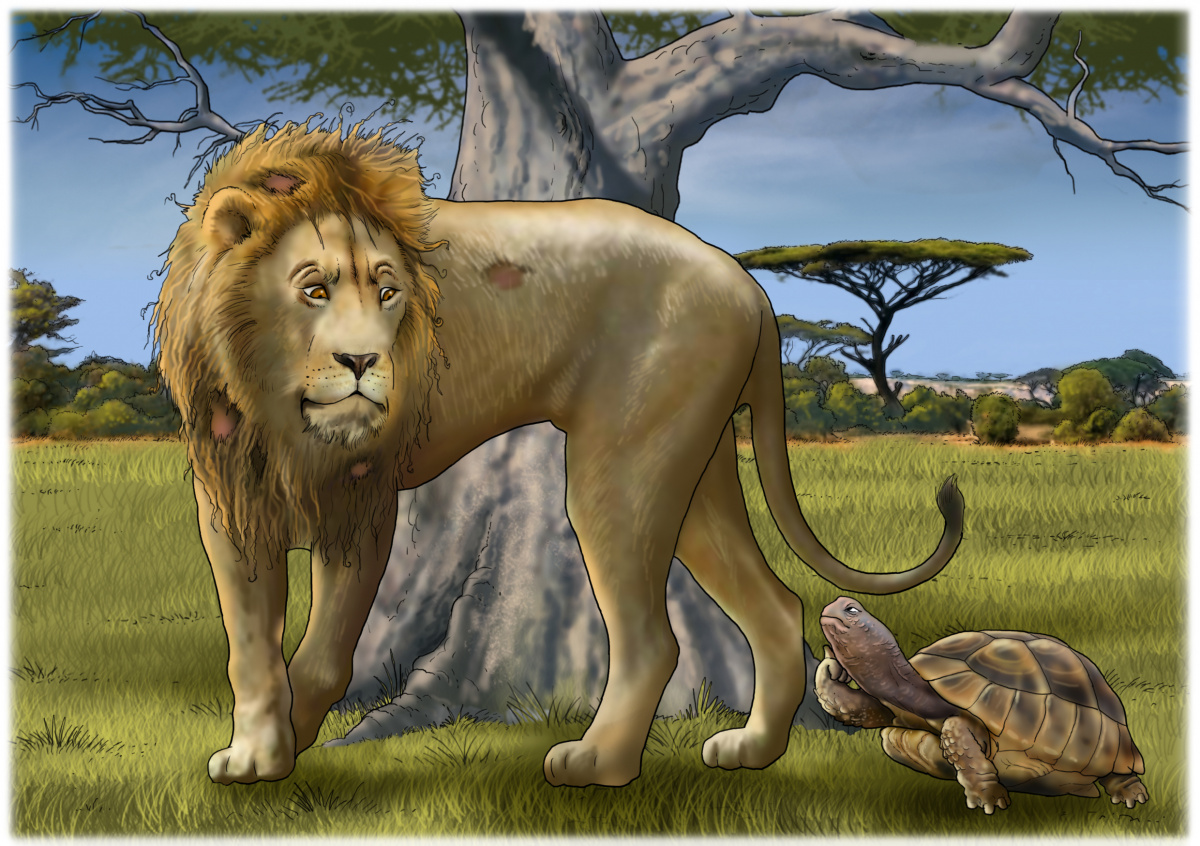 “Oh no! This sounds very bad,” gasped Lion, but it wouldn’t do for a great big lion to cry. His knees were shaking. “Will … will I live?” he gasped.

“Of course you’ll live,” laughed Dr Tortoise, “you’ve just got a serious case of fleas. You need to go and ask Monkey to pick the fleas off for you. Then you’ll be right as rain.”

“Fleas? Is that all?” said Lion looking relieved. He thanked Dr Tortoise and hurried off to find Monkey.

Monkey was up to mischief as usual. He was sitting in a tree throwing rotten ngwenya berries at a lazy warthog that was sleeping in the sun.

“Monkey!” roared Lion. Monkey jumped and almost fell out of his tree. “Monkey, please could you come and pick the fleas from my coat for me?” asked Lion.

“Yes, of course, Your Majesty,” chattered Monkey dropping his last berry and hurrying down the tree.

When Lion woke up he found that he couldn’t move. He roared with anger when he discovered that Monkey had tied his tail to a tree. The more Lion pulled and wriggled, the tighter the knot in his tail became. A little bushbaby watched with saucer eyes from the tree as Lion struggled and pulled.

“I could help you, Lion,” said Bushbaby sweetly, “but you would have to promise not to eat me.”

So Bushbaby climbed down from the tree and started undoing the knot with his long delicate fingers. Finally Lion was free. He thanked Bushbaby and went on his way.

As he walked along, Lion thought about what Monkey had done to him and he felt very cross. He decided to teach Monkey a lesson. He told the other animals to wait five days and to then tell Monkey that Lion had died.

Five days later the animals went to Monkey and told him that, sadly, Lion had died. Warthog even pretended to cry. The animals told Monkey that they had decided to say goodbye to Lion by having a party. Monkey loved parties, and so he said, “I’ll definitely be there!”

That afternoon Monkey watched the animals line up near the great body of the lion and then walk past him one by one, stroking his mane, kissing his head and saying goodbye. Monkey hopped from one leg to the other. He was hoping to say goodbye to Lion quickly so that he could get to the food at the party.

When he reached Lion’s head, he leant over and chattered, “Goodbye you silly old cat. I tricked you properly.”

Lion’s eyes flicked open and he jumped up with a R-O-A-R! Monkey got such a fright that he fell over backwards. 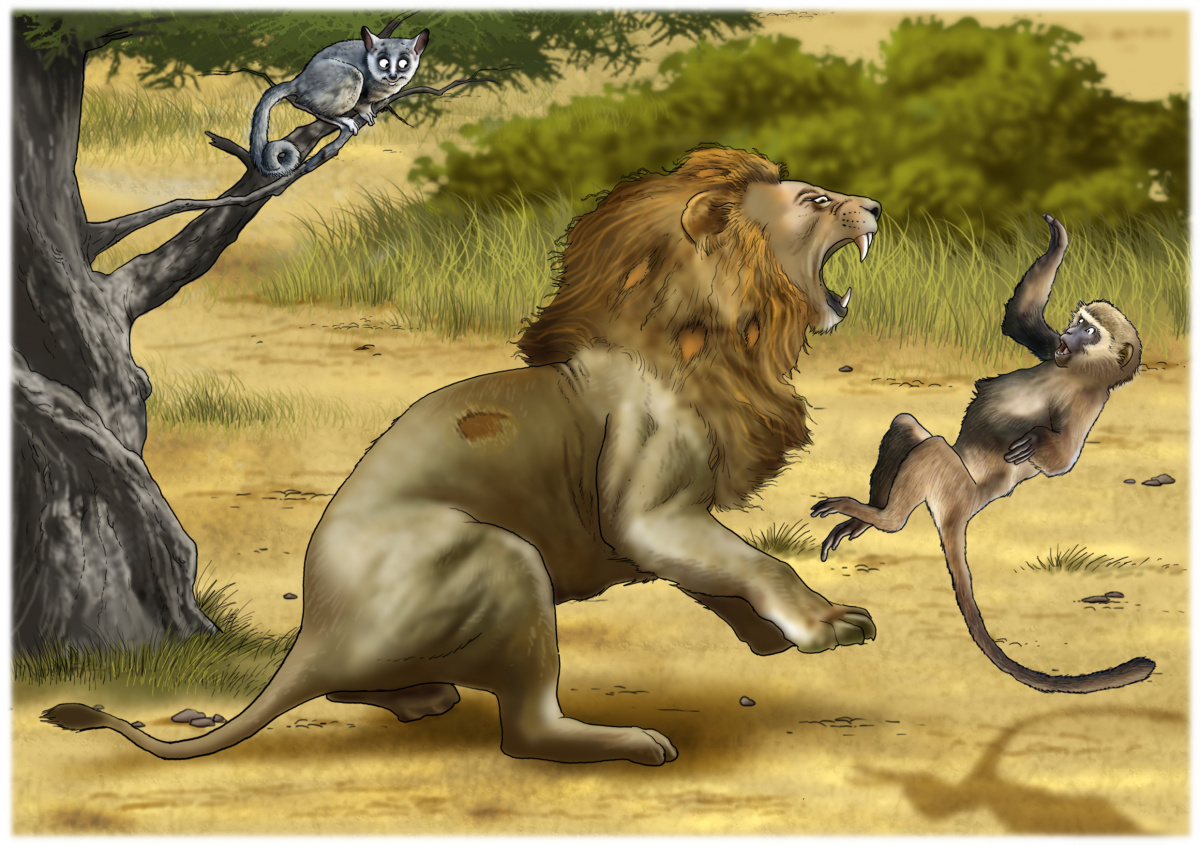 Quickly Monkey scrambled to his feet and raced up the closest tree, where he sat chattering and shivering in fright. Lion roared again and shook his giant paw at Monkey, “You and all the other monkeys better not come down from the trees! If you do, I promise you that I’ll eat you for supper!”

And to this day, monkeys spend all their time in the trees not daring to come down for fear of becoming Lion’s next meal.

Invite your children to draw a picture of the part of the story where Monkey is watching the other animals walk past the body of the lion. Suggest that they draw speech bubbles or thought bubbles for Lion, Monkey and the other animals, and then either write words or draw pictures in the bubbles to show what the animals might be thinking or saying.