We have to go! | Nal'ibali
Skip to main content
Home | Story Resources | Multilingual stories | We have to go!

We have to go!

It was Tuesday and there was no school. All the children were meeting at the library for a special day. It was International Literacy Day and people all over the world were going to read and write and listen to stories on the same day.

Neo was so excited. His favourite author, Joan Rankin, was coming to the library to read from the books she had written, and his dad had promised to take him to see her. Neo had written a special book about her, and he couldn’t wait to give it to her.

But when Neo got up on Tuesday morning, there was a funny noise coming from the kitchen. He went to look. The washing machine was making a terrible rattling, coughing noise as if it was going to explode. 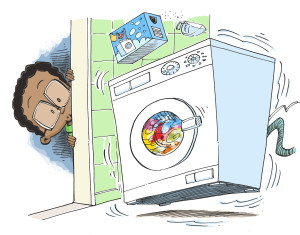 Neo’s dad came to see. “Oh no!” he said. “The pump must be broken. It’s going to cost so much to get it fixed. We might have to buy a whole new washing machine.”

“We can’t afford a new washing machine,” Neo’s mom said. “Please, can’t you fix it? I have to go to work, and there’s so much dirty washing.”

Dad hated seeing Neo’s mom so upset so he said, “I’ll fix it. Neo will help me. I’ll find a website that shows me how to mend broken washing machines.”

“But, Dad, you promised to take me to the library,” said Neo.

“That will have to wait, Neo. The washing machine is more important. Maybe Gogo can take you,” said Dad.

Neo was very upset. “But, Dad, you promised me you would take me to the library,” he said. “We have to go soon.”

Dad fetched his toolbox and googled, “How to fix a washing machine pump” on his cellphone.

“Here you go,” he said to Neo, showing him the page. “This doesn’t look too difficult.” And with that, he pulled the washing machine out and turned it around so he could take off the back.

But fixing the machine was more difficult than it looked.

“There’s a drawing here,” Dad grumbled, looking at his phone. “But it’s so small, I can’t see what goes where.” 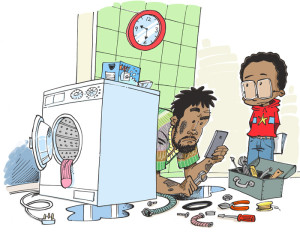 Then Dad dropped one of the screws and it rolled under the fridge, so he had to pull the fridge out to get the screw. Neo looked at the clock. It was half past nine. Only half an hour until Joan Rankin arrived at the library.

“Please, Dad,” he said, hopping from one leg to the other.
“Please, hurry so we can go to the library. We have to go now.”

“I’m busy here and you are not helping, Neo!” Dad looked cross.

Neo was upset. His father had promised to take him, but now everything was going wrong.

“What?” Neo asked in a small voice.

“Now my phone’s battery is flat!” Dad shouted. “Please fetch me the charger.”

But at that very moment the power went out.

Dad seemed very angry. “This is the worst Tuesday ever. I’m halfway through fixing the machine and now I can’t read about what to do next.”

Neo nodded. “Yes, it is the worst Tuesday ever. You can’t fix the machine, and I’m missing Joan Rankin,” but he didn’t say any more because he could see that Dad was very upset. Neo slumped down at the kitchen table and hid his head in his arms.

Dad packed away his tools. “There’s not much we can do now,” he said.

Neo lifted his head a little bit. The clock said ten to ten. They could still make it to the library – they’d be late, but he’d still see Joan Rankin and he could still give her his present. He turned the pages of the little book he’d made. He’d written the story and drawn the pictures, and Gogo had helped him put it together and make a cover. Dad was calming down. He picked up Neo’s book. “What’s this, Neo?” he asked.

“My book,” Neo said in a tiny voice. “I was going to give it to my favourite author at the …” He didn’t finish the sentence.

“Come on,” called Dad, grabbing his car keys. “We have to go NOW! We can still get to the library in time if we hurry.”

Joan Rankin had begun to read her story to the children when Neo and Dad hurried into the library. Neo found a seat at the back and settled down to listen. Her story was wonderful, and so were her pictures. Neo hoped he’d be able to draw like that one day.

And the best of all? When she’d finished and Neo showed her his book, she thought it was wonderful.

“Did you really write this story all by yourself?” she asked him.

Then Joan Rankin opened her bag and took out one of her books. Inside she wrote, “For Neo, who makes beautiful books”, and she signed her name in big letters and gave it to him.

Neo was so happy. He held the book so tightly he never wanted to let it go.

Just then Dad came over. “You won’t believe it,” he said. “I found a book on how to fix washing machines, and look − the drawings are big and clear. Why didn’t you tell me the library had books like this, Neo?” 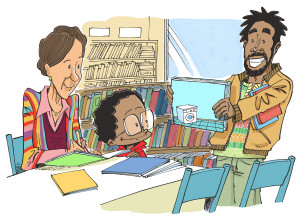 Dad gave Neo a hug. “Books are awesome. Their batteries never run flat, and you can even read them when the electricity goes off.”

Neo smiled a happy smile and nodded. That was true. You can read a book anywhere and anytime.