A long time ago, the place at the foot of Table Mountain that we now call Cape Town, was dry and empty. At that time, it was said that Table Mountain was made of glass and that a magic dassie who granted wishes, lived at the very top.

Men and women came from all across South Africa and tried to climb the glass mountain to get to the magic dassie, but the sides of the mountain were very slippery and no matter how hard they tried, no one could make it to the top.

One day, a young boy called Khwezi arrived in Cape Town. He wanted to get to the top of the mountain. That night, he went into the veld and found Leopard.

“Leopard,” Khwezi said, “I need to ask you a favour. If you help me, I promise that I will fill this dry, empty land with plants and animals. You will never go hungry again.”

Leopard looked hungrily at the boy. “Why should I help you? I could just eat you, you know,” said Leopard licking his lips. And then Leopard thought some more about Khwezi’s offer and said, “Actually a land filled with plants and animals sounds wonderful. I accept. What do you need?”

“You are very good at climbing, and with your sharp claws, we should be able to get to the top of the glass mountain,” said Khwezi, getting onto Leopard’s back.

They walked through the veld, across the dry land, all the way to the glass mountain. 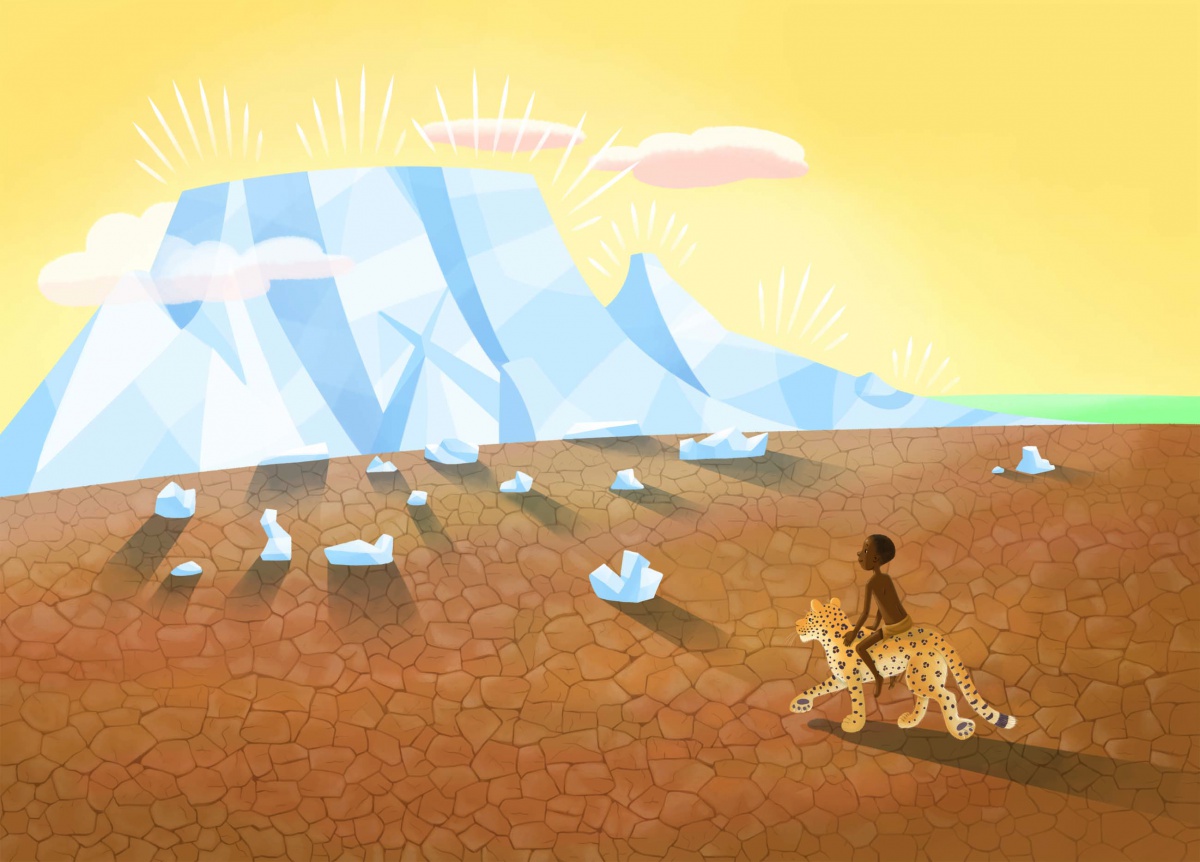 At the bottom of the mountain, Leopard dug his claws into the slippery glass sides, and started to climb up. It took a long time and they had to climb very slowly. When they were about halfway up, Leopard sighed. “I’m too tired to carry on,” he said, lying down against the glass. “It’s impossible to get to the top, even with my claws.”

Vulture, who was a big scary bird, circled in the sky above them.

“I have an idea,” said Khwezi, “let’s lie here and pretend to be dead.”

So they lay down on the glass and pretended to be dead. Soon, Vulture landed, thinking he had found something good to eat.

“Hiya!” shouted Khwezi, jumping from Leopard’s back and grabbing hold of Vulture’s claws. He held on tightly. Vulture shrieked in surprise and flew into the sky, carrying Khwezi off with him. Leopard watched them go and then slid slowly back down the side of the mountain.

“What do you want with me?” asked Vulture, struggling to fly.

“Vulture,” said Khwezi, “could you fly me up to the top of the mountain? If you do, I will fill this dry, empty land with plants and animals. Then you will never go hungry again.”

“That sounds wonderful,” said Vulture, “and I am very hungry. Okay, I’ll try and fly you to the top of the glass mountain.”

So Vulture flew Khwezi up through the clouds. It took a very long time, but in the end they reached the top of the mountain. Khwezi jumped from Vulture down onto the flat top of the glass mountain.

Khwezi saw a golden dassie sitting on a cushion of small purple flowers, eating a long piece of yellow grass.

“You must be the magic dassie,” said Khwezi.

“I am,” said the dassie. “What is your wish? I could make you the richest person in the world, or maybe you want to be handsome, or famous.”

Khwezi thought about all these things and then he thought about Leopard, and Vulture, and all the hungry people living in the place we now call Cape Town.

“No,” said Khwezi, “I wish to fill this dry, empty land with plants and animals.”

“If you say so,” said the magic dassie, blinking.

There was a loud POP! and golden sparks filled the sky. Khwezi closed his eyes and when he opened them again, the mountain was no longer made of glass, it was wild and natural and filled with many wonderful plants, much as it is today. He looked out over the land further away, and he saw that it was filled with plants and animals. Vulture swooped past with a big smile on his face. Khwezi looked for the golden dassie, but he had disappeared. 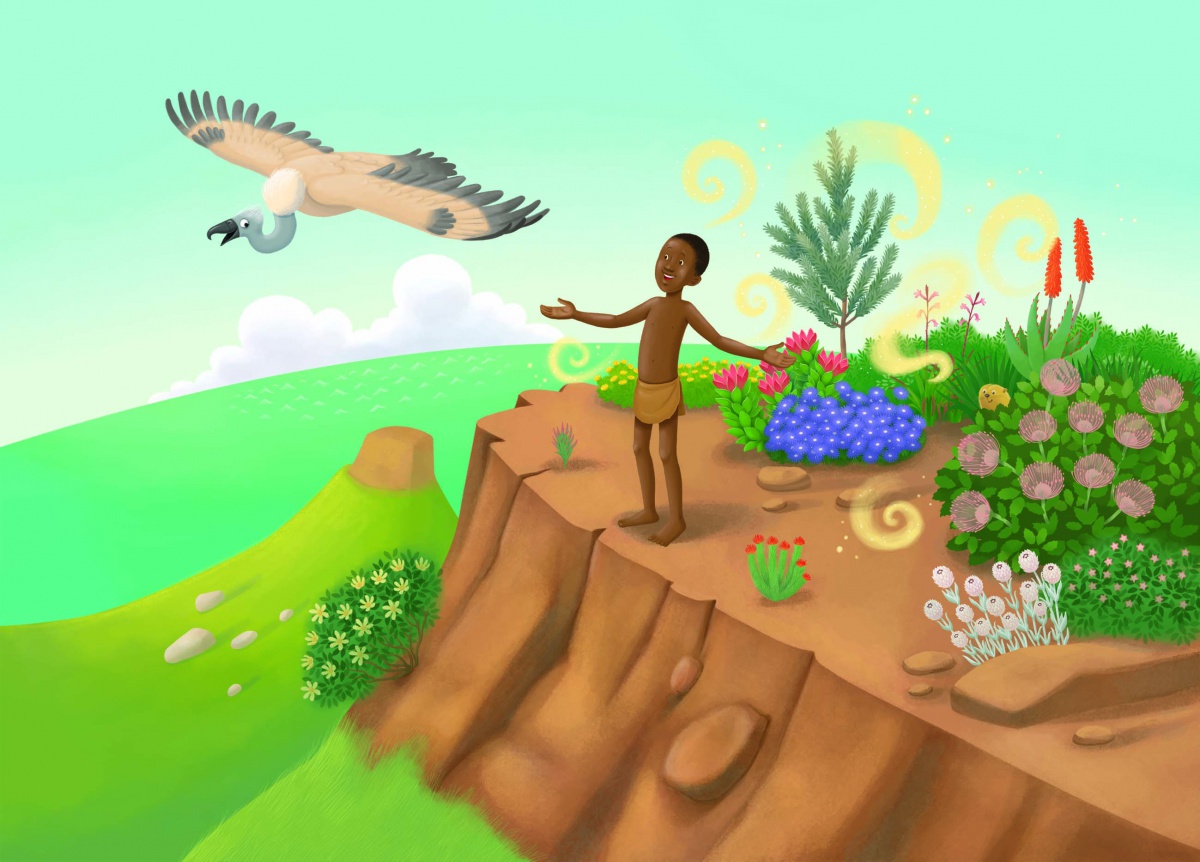 On his way down the mountain, Khwezi found Leopard sleeping in the shade of a tree.

Khwezi patted him and carried on walking down the mountain. When he reached the bottom, Khwezi was met by a crowd of people who cheered and lifted him onto their shoulders. Then they had a big party to celebrate. After a long time more and more people came to live in the land around Table Mountain, and they made a city that would later be called Cape Town.