The farmer and his family

A long time ago in Limpopo, there lived a farmer and his family – his donkey, his pig, his dog, his cat and his rooster. They all lived happily together on the farm. Then one day the rain stopped and there was no more water. The vegetables could no longer be watered and there was not much left to drink.

The farmer called his donkey, pig, dog, cat and rooster. “We have to move to a place where there is water,” he said. So they all left. The farmer took a few of his things with him in a bag. Together they walked along the dusty road one behind the other. Tramp-tramp! Clip-clop! Snuffle-snort! Woof-woof! Meow-meow! And cock-a-doodle-doo! 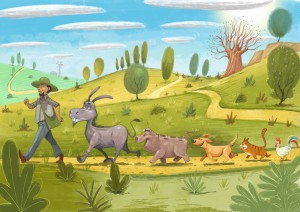 On their way to a place where there was water, the farmer and his animals met a crow. The crow watched them all walking and laughed at the farmer.

“Kwaaa! kwaaa! Why are you walking when you have a donkey? If I were you, I would ride on the donkey,” the crow said as he flew off laughing, “Kwaaaa! Kwaaaa!”

The farmer thought about this for a while. Then he decided to climb on the donkey’s back. He rode on the donkey while the other animals walked behind them. Clip-clop! Snuffle-snort! Woof-woof! Meow-meow! And cock-a-doodle-doo!

Soon they met a meerkat.

“Woahaha! Woahaha! You have no shame,” said the meerkat to the farmer as she sat up straight to stare at them. “How can you ride on the donkey’s back alone? Look how tired your pig is? His nose is dripping sweat.” Before she disappeared inside her home she laughed again, “Woahaha! Woahaha!”

The farmer stopped and thought about what the meerkat had said. He looked down at his pig and decided to let the pig ride on the donkey with him.

At last the farmer saw a river, but it was still far away.

“We will go there,” he said pointing. The animals all agreed and they carried on walking until they met a jackal.

The farmer felt bad and decided that now they would all have to ride on the donkey’s back. He moved up towards the donkey’s neck.

“Jump up, Dog! Jump on top of the pig,” said the farmer. So the dog jumped on the pig, that sat on the donkey’s back, behind the farmer.

Suddenly, right in front of them stood a hare.

The farmer thought about what the hare had said. He felt very bad. The farmer wanted to say something to the hare about all the things that had been said to him on the way, but the hare had already disappeared.

After another few steps, the donkey stopped suddenly and went down on his knees. The rooster crowed and flew off. The cat meowed and jumped down. The dog barked and ran off. The pig oinked and rolled onto the ground.

The farmer got off his donkey and stood scratching his head. He looked at his tired donkey and then went to fetch him some water. The farmer remembered all the things that had been said to him as he and his animals were walking along. He thought and thought and then he decided that never, ever again would he just do what he was told. He would think about it more carefully first and see if it was the right thing to do. He would also tell his animals what had been said and together they would decide what to do.

The farmer called his donkey, pig, dog, cat and rooster and they all sat down in the shade of a big marula tree. While they were sitting there, the farmer asked his donkey for forgiveness.