Cassidy Ann and her big sister, Trixie, were waiting in the car. Grandpa had gone into the garden shop, but he wasn’t going to be long. The car park was empty, except for a big truck that was parked on the other side of the fountain. The truck was filled with plants, and men were unloading them onto trolleys for the shop. 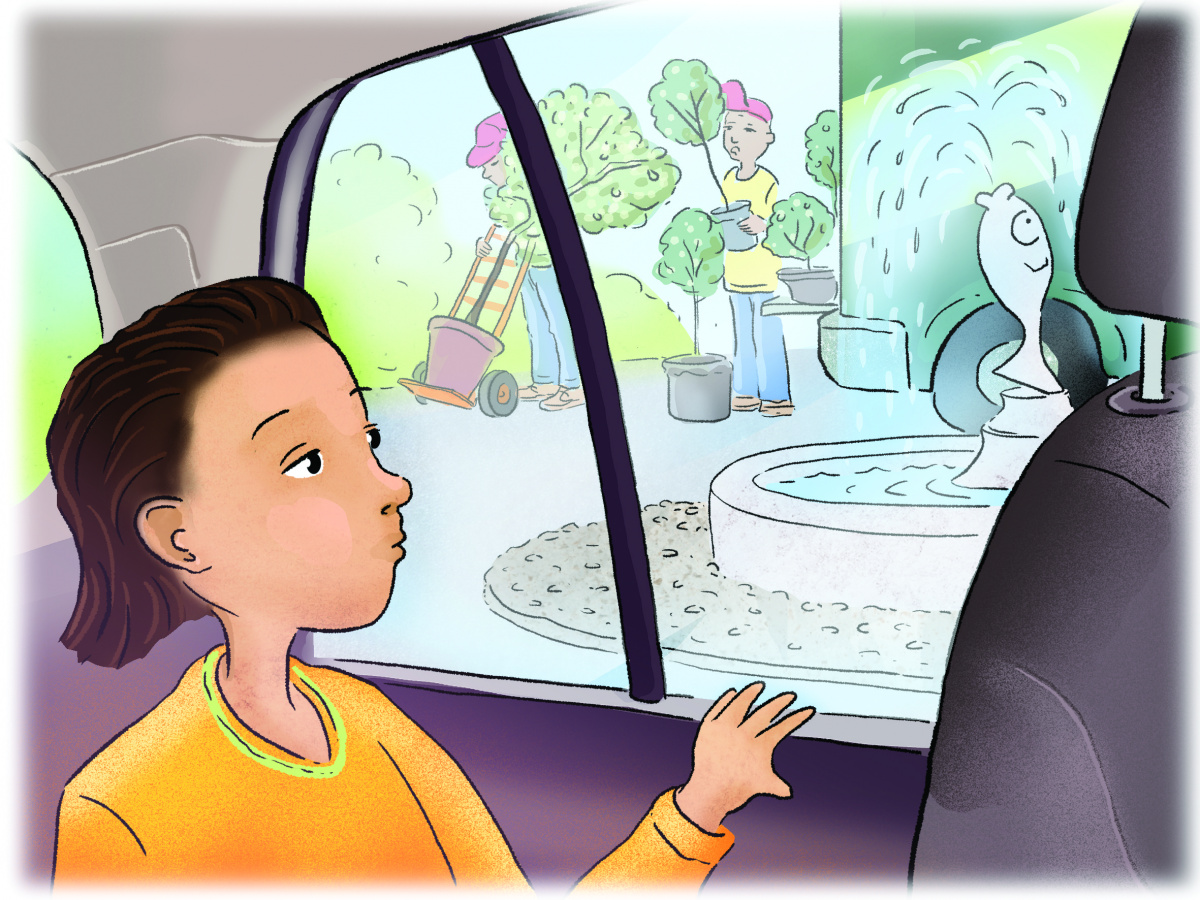 Through the fence Cassidy Ann could see Grandpa walking along the rows of plants. He was trying to decide which rose bush to buy.

Suddenly a cabbage fell off the truck. It bounced on the ground, and rolled past the tinkling fountain.

“Did you see that, Trixie?” Cassidy Ann asked. “That cabbage fell off the truck.”

Trixie looked up from her book. “So what?” she said. “It’s just a cabbage.”

Cassidy Ann watched, waiting for someone to see the cabbage and pick it up. But the men were so busy, they hadn’t even noticed it was gone. The cabbage rolled and rolled down the car park towards their car. It stopped right next to the car. Cassidy Ann opened the door to pick it up.

“What are you doing?” Trixie asked, turning the page. “Grandpa told us to stay inside the car.”

Cassidy Ann closed the door. She sat there in the car, worrying about the cabbage. She saw the men climbing back into the truck. “I’m just going a tiny way,” she said, opening the car door again. “Just to give the cabbage back to the men in the truck.”

The men were ready to go. They were slamming the doors and the driver had already started the engine.

“Fine,” Trixie said, “but if Grandpa comes back and finds you gone, it’s not my fault.”

So Cassidy Ann jumped out of the car, grabbed the cabbage and ran over to the truck.

But she was too late. The driver hadn’t seen her. He drove off and Cassidy Ann was left standing in the car park, holding a very big cabbage.

“What shall I do now?” she thought. “It doesn’t belong to me, but I can’t give it back. Should I leave it here? Or should I take it home for Granny to cook?”

Up it flew, right up to the top of a very tall avocado tree. Then down it came again, while Cassidy Ann held on tight, and BOOOOOING! it bounced on the road and shot up again, this time onto the roof of the garden shop.

It was nice up there. Cassidy Ann could see everything – the people buying plants in the garden shop, a lady taking her dogs for a walk along the river, the water lilies in the fountain, and Trixie reading her book in the car. It was fun.

But then the cabbage was bouncy again. It was shaking and shivering and wiggling up and down, and Cassidy Ann had to hold on tight to stop it from getting away from her.

“Where are you going now?” she shrieked as the cabbage bounced once, twice, three times … then swooooosh into the air, and boooooing down to the ground. Sppppplashhh! it landed in the fountain, scattering water everywhere. Then up it went again, while Cassidy Ann clung on giggling, and booooing down again into the fountain. Even more water shot out, splashing an angry lady carrying a bunch of flowers. 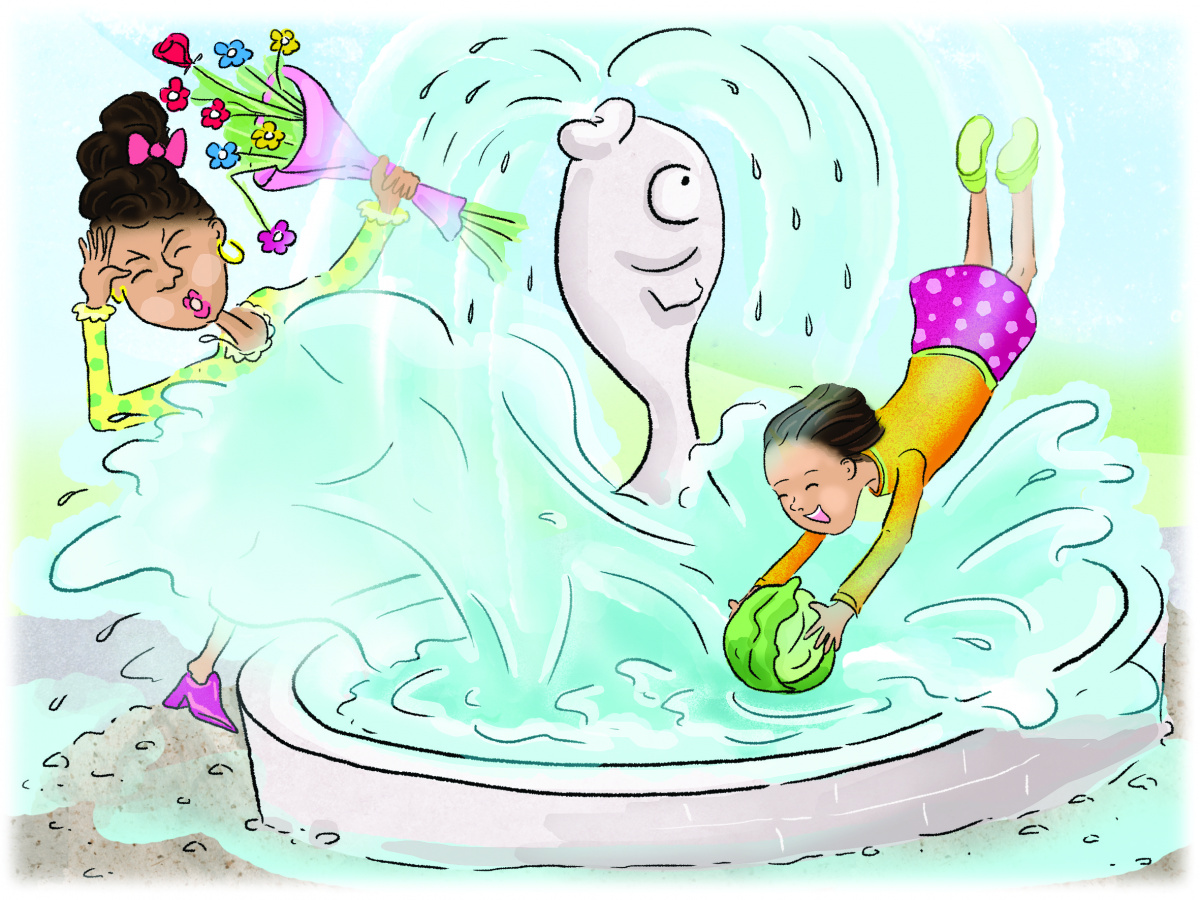 Up it went again, high, high, high until Cassidy Ann could smell the clouds and feel them making her clothes all damp. Up, up, up till the car park looked far away, and Grandpa’s car looked as tiny as a toy car. Cassidy Ann could see Grandpa coming out of the garden shop, pushing a trolley with a big spiky rose bush on it. The cabbage started shivering and shaking and then it began to fall down, down, down. Cassidy Ann just knew she was going to land on the spiky, thorny rose bush, so she started to scream, “Grandpa, watch out, Grandpa!”

Grandpa looked up and said, “Cassidy Ann what on earth are you doing flying through the …” Just as she was about to crash into the spiky, thorny rosebush, Grandpa held out his arms and caught Cassidy Ann. He overbalanced and they both tumbled into the fountain. Luckily there wasn’t much water left in the fountain, but a frog got a terrible fright and jumped out, croaking. And Grandpa sat up in the fountain with a lily leaf draped over his head, and Cassidy Ann’s dress was all green and slimy from the pondweed.

Trixie came running over, and helped Grandpa up. “What happened?” she asked. “How did you both fall into the fountain?”

“Cassidy Ann pushed me,” Grandpa said. “I think that’s what happened! I can’t quite remember.”

“It was the magic bouncing cabbage,” Cassidy Ann explained. “It bounced me right up into a tree, and onto the roof, and into the fountain, and then as high as the clouds. And then it bounced me down again and I nearly landed in Grandpa’s rose bush.”

“Hmmmmph,” said Trixie. “You’re naughty to make up stories like that and pretend they are true, Cassidy Ann! Next time you must do as you’re told and stay in the car.”

Cassidy Ann wanted to show them she wasn’t making up stories, so she looked around for the cabbage. It was gone. Then she saw it – so high in the sky that it looked like a bird. A fat green bird, bouncing up and down on the clouds.

But they still didn’t believe her. Grandpa wasn’t cross though. He began to laugh and they laughed all the way home.

Ask your children how they think the bouncing cabbage might have got onto the truck of plants at the beginning of the story. Then suggest that they use their ideas to write a piece which can be added to this story before it begins.