Layla loved jigsaw puzzles. She loved everything about them – from the picture on the box to the moment when she fitted the last piece in its place. She even liked the sound and the feeling of the pieces as she shifted them around on the table. So every Saturday morning, when Layla’s mother took her to the library to change her library books, Layla also took out a puzzle.

Now, the librarian kept all the puzzles on a shelf behind her desk and each Saturday when Layla asked if she could look for a puzzle to borrow, the librarian would say, “Wow, Layla, but you are puzzle mad!” And Layla didn’t mind at all because she WAS puzzle mad! 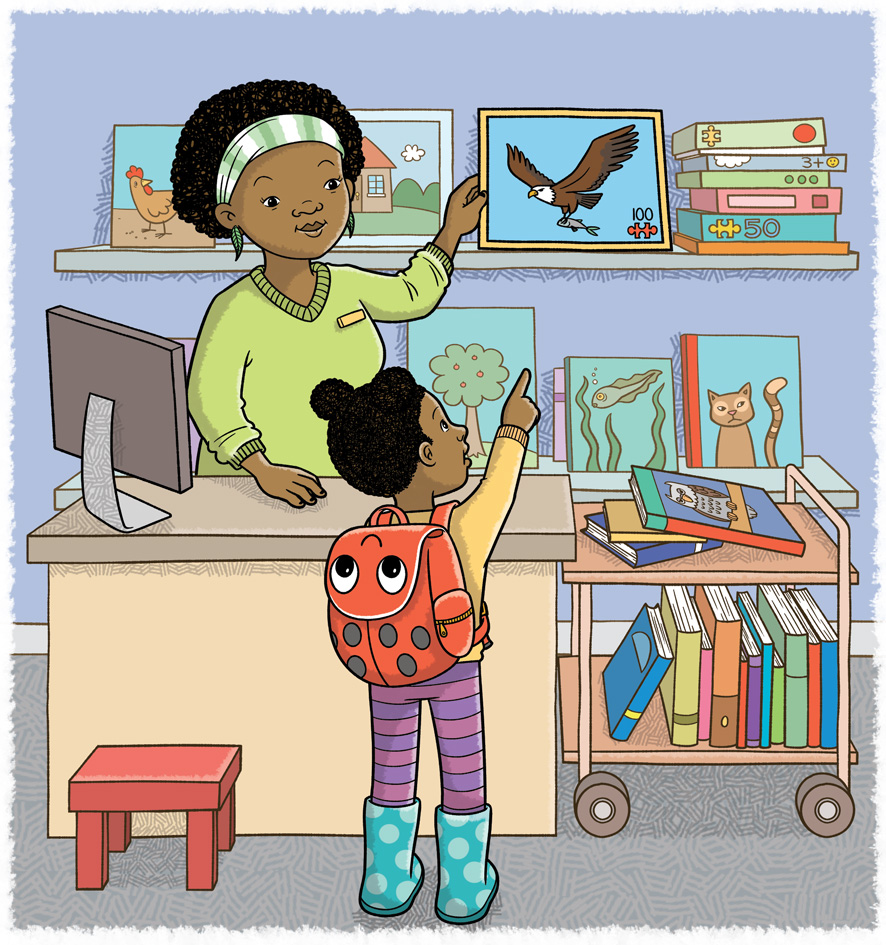 One Saturday morning, Layla borrowed a puzzle of an African fish eagle from the library. The picture showed the bird high up in the sky with its wings spread wide and a fish in its claws. The puzzle had more pieces than any puzzle Layla had ever done. And not only that, the pieces were also smaller than any puzzle Layla had done. Layla could not have been happier! But Shireen was not at all happy because all Layla wanted to do was start the puzzle.

“I don’t want to do a boring puzzle,” said Shireen. “Let’s rather play shop-shop.”

Soon Layla had spent all her money. Then Shireen said, “Let’s play hospitals.”

But for some reason, Shireen still did not want to do the puzzle, so she said, “Let’s play hospitals now and then we can do the puzzle after lunch.”

And so that’s what they did.

“I’ll be the doctor,” said Shireen.

“No, you were the shopkeeper,” said Layla. “I’ll be the doctor.”

“But you can’t be,” said Shireen, “because I’m best at being the doctor.”

So, Shireen was the doctor and Layla was the sick person!

But before Doctor Shireen could get any more cross, Layla’s mother called them for lunch.

“I hope you girls are having a good time,” said Layla’s mother.

“Yes,” said Layla who was about to bite into her yummy roti filled with peanut butter, grated carrots and sultanas. “After lunch we are going to do my puzzle.”

“I don’t want to do your puzzle,” said Shireen.

“But you promised,” said Layla.

“Well, now I don’t want to. I want to do some colouring in,” said Shireen. 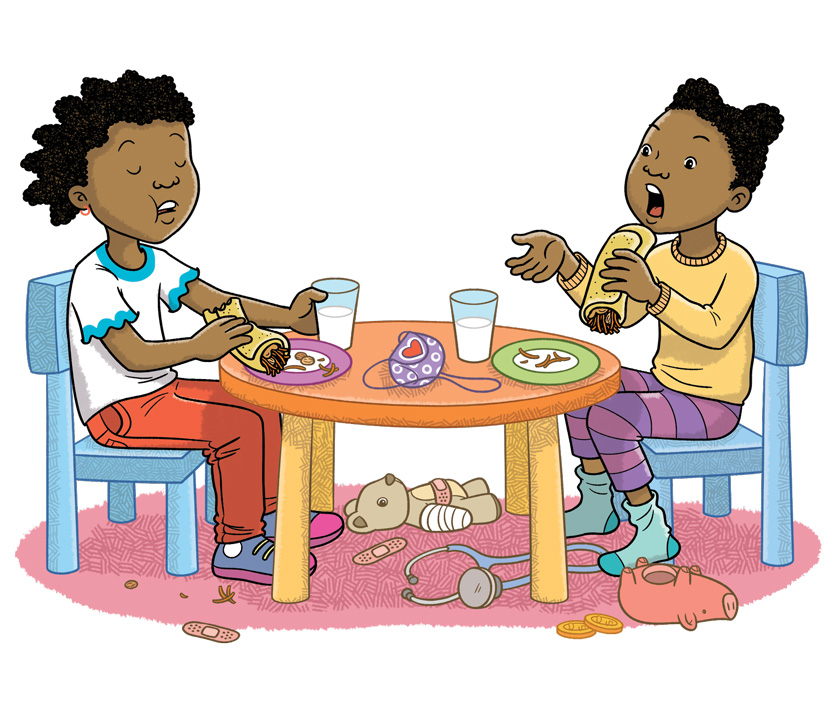 By now, Layla was tired of Shireen’s “I-am-the-best-at-everything” talk and cross with her for breaking her promises. Nothing was going to stop her from doing the puzzle. So after lunch, Layla gave Shireen a colouring-in book and some crayons so that Shireen could colour in while she did the puzzle. But there was only one picture left to be coloured in in the colouring-in book and Shireen soon finished it. Then she held it up to show Layla and said, “You’re so slow!”

“That’s because this puzzle is hard,” said Layla.

“I bet I could do it faster than you,” said Shireen.

“Okay,” said Layla, “when I have finished it, you can try doing it and then let’s see!”

Once Layla had finished the puzzle, she broke it up. She put all the pieces back into the box except for the piece with the eagle’s eye on it. And then she gave the box to Shireen.

“But you promised!” said Layla.

“Maybe you don’t want to because you can’t do puzzles,” said Layla.

“I can!” Shireen shouted back. “I’m the best at puzzles!”

Shireen grabbed the box from Layla. “I will,” said Shireen, “but only if you go and play outside. I’ll call you once I’ve finished it.”

Layla went outside and drew some pictures in the sand with a stick while, inside, Shireen opened the puzzle box and started turning the puzzle pieces picture-side up.

Outside, Layla found a piece of old rope and tied it around the loquat tree so that when Shireen was finished with the puzzle they could play skipping. But inside, Shireen was struggling to fit the pieces of the puzzle together. She wished that she had not said that she was the best at puzzles. Quickly, she broke up the bit of the puzzle she had managed to do and put all the pieces back into the box. Then she ran outside and called to Layla who by now had climbed high up in the loquat tree, “I’ve finished!”

“Yip,” said Shireen and she began climbing up into the tree.

“But I have packed the puzzle away already,” said Shireen.

“So that you don’t have to pack it away later,” replied Shireen.

“Oh,” said Layla, “but what about this piece?” She held up the piece with the eagle’s eye on it that she had kept.

After a little while, Layla shouted, “Hey, guess what, I found some ripe loquats. Do you want some?”

Layla climbed down to the lower branch where Shireen was sitting and handed her some. And there they sat, eating loquats and seeing how far they could spit the pips. 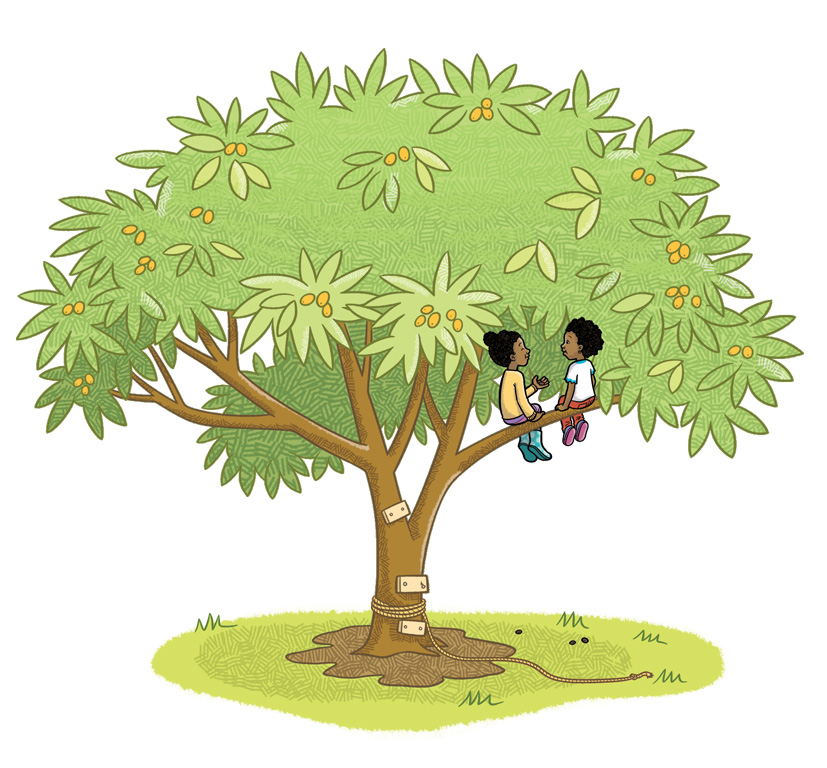 Make your own puzzle! Cut a picture out of a magazine or newspaper – or draw your own. Glue the picture onto a piece of cardboard and draw lines on it to divide it into the number of

pieces you want your puzzle to have. Now cut along the lines. Mix up the pieces and build your puzzle or give it to a friend to build.