Once upon a time there was a young man whose name was Thukile. He lived with his mother in a tiny house. They were very poor and the only money his mother made was by selling the eggs that her hen laid.

Thukile was so lazy that he did nothing. He would lie in the shade in the summer and sit by the fire in the winter. His mother could not get him to help with anything.

One Monday morning she was so upset that she said, “Thukile, if you do not go and work for your food I will make you leave this house forever.” 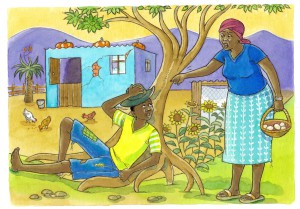 This worried Thukile. “I had better do something,” he said. “This time my mother sounds very cross.”

So on Tuesday, he went to the farmer across the river and asked for a job. The farmer got Thukile to fix his fence. For this he was paid a few silver coins. Thukile had never had any money in his life. He held the coins in his hand and bounced them up and down so that he could see them shine in the sun. But before he had even crossed the river, he had lost all the coins.

“You silly boy,” said his mother when he got home, “you should have put them safely in your pocket.”

On Wednesday, Thukile went out again. “May I help you with your cows?” he asked another farmer.

“Yes,” said the farmer, “and I will give you a jar of milk to pay you for your work.”

At the end of the day, the farmer gave Thukile the jar of milk. Thukile took the jar and put it into the large pocket of his coat exactly as his mother had said he should. Splish! Splash! Splosh! The milk spilt out as he walked along the road and the jar was empty long before he got home.

“Dear me!” said his mother. “You ARE silly! You should have carried the jar on your head.”

On Thursday, Thukile went to a woman who made yoghurt. She agreed to give him some yoghurt if he helped her. That afternoon she gave Thukile the yoghurt. It was in an open plastic container that was wrapped in a cloth. Thukile walked home with the container on his head because that’s what his mother had said he should do. But by the time he got home, there was very little yoghurt left in the container. Some of it had dripped out, some of it had got stuck in his hair.

“You silly, silly boy, Thukile,” said his mother, “you should have carried it very carefully in your hands.”

On Friday, Thukile went out again. This time he worked for a baker. The baker had nothing except a dog to give Thukile for his work. So at the end of the day the baker paid him by giving him the dog. Thukile took the dog and walked home carrying it very carefully in his hands.

“This is how my mother said I should carry you,” Thukile told the dog. But before long, the dog began to whine and wriggle. Then, it started to scratch and nip him so badly that he had to let it go.

When he got home, his mother said to him, “Oh, Thukile, you are so silly. You should have tied a string to its collar and let it follow behind you.”

The next day was Saturday and Thukile went to work for a butcher. This time he was paid with a nice piece of meat. He took the piece of meat, tied a string around it and did exactly what his mother had said − he dragged it along behind him! By the time he got home, the meat was completely spoilt.

This time his mother was very angry with him. “What am I going to do with you?” she asked. “Tomorrow is Sunday and now we will have only cabbage to eat for dinner. You are so silly, you should have carried the meat on your shoulders.”

“I’ll do that next time,” replied Thukile.

On the Monday, Thukile went out again and worked for someone who gave him a donkey as payment. Now although Thukile was very strong, he found it difficult to get the donkey on his shoulders. He struggled and struggled, but at last he had the donkey up and on his shoulders, just the way his mother had told him. Then he began to walk home slowly.

On Thukile’s way home, he had to pass a house where a very rich man lived. The rich man had only one daughter. She was very beautiful, but for years and years she had not said a word. She had also never laughed in her life. The doctors said that she would only be able to speak again if someone made her laugh. The rich man was so worried about his daughter that he said anyone who made her laugh, could marry her.

The beautiful girl was looking out the window as Thukile passed with the donkey on his shoulders. The donkey’s legs were sticking up in the air and it looked so funny that the girl burst out laughing. At once she was able to speak again. 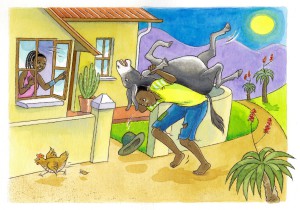 The rich man was so happy, and he kept his promise − he said his daughter and Thukile could be married. Thukile became a very rich man just because he had been silly enough to carry a donkey on his shoulders!

From that day on, Thukile lived in a big house together with his wife and his mother who never had to work again. And, of course, Thukile never had to carry anything else himself again.