A promise is a promise

Storks are those birds with the long orange legs and long orange beaks who fly from North to South and back again. Now, a very long time ago, storks were the noisiest birds in the whole world.

They used to talk all the time. By the time they reached Africa on their flight South, each of them was talking about a different thing, all of them were talking at the same time, and not a single one of them had anything interesting to say.

Another would say, “I love to fish in water. Water is so wet.”

And another would say, “Wet? I hate getting wet.”

“Fly? Why, you just have to flap your wings and you can fly!” 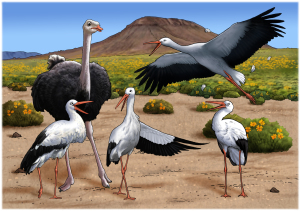 And it was those last few words that the ostrich heard. He did not like the storks’ chattering, but he forgot about the noise because the one thing he really wanted to do was fly.

So off he went to practise. For days he tried. He ran this way and that. He flapped his wings, but he never lifted off the ground.

“That’s it,” he said. “Not only do those storks talk too much, they talk nonsense. They need to be punished.”

“We can’t stand it either,” complained the other animals. “Let’s go see the wise lizard.” So off they went to the river.

“You want silence?” asked the lizard. “Easy! Just say these words tonight at midnight and you will have silence.” Then he whispered the magic words. “But,” he said, “remember one thing. At midnight on the third day the spell will end. After that you have to come up with your own plan.”

At midnight the animals gathered together. They whispered the magic words and waited for morning.

The next day they were amazed. There was not a sound from the storks and their beaks were shut tightly. At last the animals could hear each other. They were able to talk to each other without having to shout.

The ostrich was delighted, and so he tried again. He ran about. He flapped his wings and practised to fly in peace and quiet, but he never left the ground. Eventually he went back to the storks. There they sat, huddled together with their feathers fluffed and their beaks shut.

“Oh dear,” said the ostrich, “they look so miserable and hungry. They may be irritating, but they have to eat. I wish they could eat without all the talking.”

At midday the animals had a meeting. They knew that they had only until midnight to come up with a plan.

“If the storks open their beaks now, they’ll talk even more,” said the tortoise.

“We have to think of a way to keep those beaks shut,” mumbled the hippo.

“But they have to eat,” said the ostrich … and then he had a brilliant idea.

Just before midnight the animals gathered around the storks. “Do you want to end the spell that keeps your beaks from opening?” they asked. The storks nodded eagerly.

“Well, we can arrange that,” said the ostrich, “but first, you have to make a promise, and a promise is something that can NEVER be broken.” Even the storks knew that. One by one they nodded and agreed to promise whatever the ostrich asked. 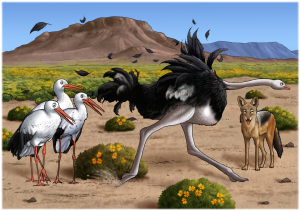 The midnight owl hooted. The storks were ready to open their beaks and chatter in excitement when the ostrich stood straight. “Now,” he said, “remember your promise.” The storks nodded again. “You will each promise NEVER EVER to speak another word.”

The storks’ beaks dropped open in shock, but they had just made a promise. And, of course, they had to do what they had promised.

From that day on storks have been silent. You will still see them clacking their beaks together pretending to make a noise, but a promise is a promise and they have not broken their promise yet.

You will also still see the ostrich running at full speed, flapping his wings trying to fly. But, to this day he has never been able to. And because of their promise not to speak, the storks cannot tell him that ostriches do not fly.