The sun looked like a small ripe melon in the sky high above Phindulo’s head. He liked to walk through the bush and listen to the birds singing in the trees. But today was different. There was a big noise coming from deep in the bush. It sounded like an argument. 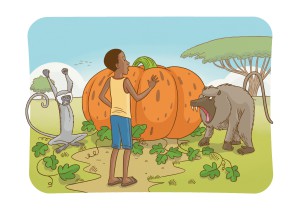 “I saw it first,” said Monkey. He waved his little fist towards the pumpkin.

“Whoa,” said Phindulo. “Stop! I thought you two were friends?”

“Well, uhh mmm,” said Monkey. “Look, we were out walking when I saw this big pumpkin here. We both ran for it and Baboon got to it first. Now he says that it’s his pumpkin.”

“Well, I saw it first. You would have walked right past it if it wasn’t for me!” said Monkey.

“And now what?” asked Phindulo. He sat down on the grass in front of them. After a long time he said, “Gosh! That is a very big pumpkin.”

“We already know that,” said Baboon and Monkey rolling their eyes.

“It reminds me of our apple tree,” said Phindulo.

“Your apple tree?” asked Monkey frowning. “What are you talking about, Phindulo?”

“Well,” said Phindulo, “just last year, the apple tree in our garden grew so many apples that every cupboard and basket in the house was filled with apples. And no matter how many we ate and made into pies, there were still too many for my mama, my tata and me. It’s sort of like this pumpkin.”

“Yes, Phindulo, but what are we going to do about the pumpkin?” asked Monkey.

“I don’t know,” said Phindulo. “But I can tell you what we did with the apples.”

“We had a party,” said Phindulo.

“That’s right,” said Phindulo. “We had a big party. We invited everyone. There were friends and neighbours, gogos and grandpas, cousins, nieces and nephews. We decorated our little house with streamers and balloons. Mama made her special apple pies and tata squeezed the older apples into delicious, cool apple juice. We played games together and danced. It really was a lot of fun. And everyone ate until they were full and happy.”

“Well, why don’t we have a party?” suggested Baboon.

“Good idea,” said Monkey. “We can share the pumpkin and eat it together!”

“Will you come to our party?” Monkey asked Phindulo.

Baboon and Monkey smiled happily. And the three friends cooked the very big pumpkin. They each made different things to eat. Monkey baked a pie with a golden crust and gooey centre. Baboon made a spicy soup. Phindulo fried up sweet fritters with cinnamon and sugar!

They did not have any streamers or balloons, but they played games and sang songs and ate as much pumpkin as they wanted.

Soon, other animals arrived. Elephant brought sweet marulas and nuts. Giraffe came with bottles of bubbling spring water to wash down the delicious food. Even Warthog was there with delicious sweet potatoes.

Everyone shared their food and drink. They all laughed and sang and ate until the sun hung low in the sky, like a big ripe melon. 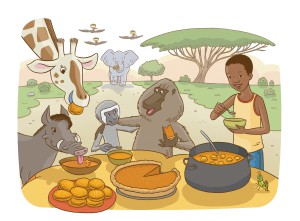