Neo and the big, wide world

Eventually, Neo came to a lot of water that rushed through the valley from morning till night. Neo stepped in to cool his hot legs.

The water splashed at his feet and giggled, “I am a river. I roam from the mountains to the sea. Come, follow me. I’ll take you home.”

Neo looked out the window of his room at the grey view of the grey street with all the wet, grey people hurrying through the grey, pouring rain. He couldn’t go outside, and he had already read all his books to Mbali.

Just then, Gogo came in with her hair all twiggy from the wind outside. She was holding something. Neo could see that it was flattish, and square-ish, and very colourful … and it could open up – just like a treasure box!

“This was my favourite book when I was as young as you,” Gogo told Neo. “It was my door to the big, wide world.”

Then, she opened the book.

On the first page was a picture of a magical place, far away from the grey, grey day. The veld was green and gold and brown, with a great, big, blue sky above, and a warm, yellow sun, baking down.

Gogo smiled. “Don’t you know? All stories are real, if you believe in them,” she said. Then she pointed to the place on the page where a little boy, just about Neo’s size, was walking across the veld.

As Gogo read, Neo closed his eyes and slipped away, over the hills … across the great, brown earth … off into the big, wide world. 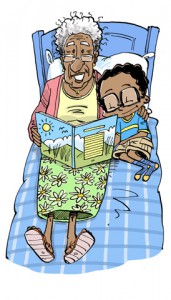 He heard the voices of the veld.

“Come out! Come out!” sang a little bird.

“Come away, come and play,” whispered the wind in the long grass.

Neo remembered about the grey, pouring rain, and wondered if he should be out here. But in a story, you can do anything. There was no rain here. So, Neo set off across the veld.

The first thing he saw was tall and brown with a strong, wooden body. It had long, brown arms that reached up to the sky, and a big, twiggy head of leafy-green hair that swayed in the warm breeze.

“I am a tree. I can see all the way across the great, gold plains. Come up, and look with me.” The tree reached out, and Neo climbed up. 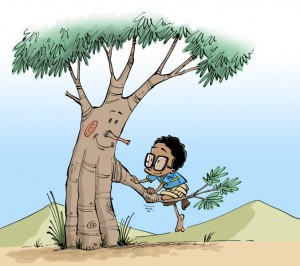 From up in the branches, Neo could see to the very edge of the world. And there was so much somewhere out there, that it almost scared him to think of it.

But the tree held him safe, and whispered, “Go and explore. Don’t be afraid. It’s a wonderful, big, wide world out there.”

So, Neo climbed down and went on his way across the veld.

Soon, he came across a mound of hard sand with little holes, like tiny doorways. He could hear a million busy voices inside, and the patter of six million tiny feet running about.

“Hello! Who are you?” Neo called into one of the doorways.

“Hello!” a tiny voice answered. “We are ants. We tell the stories of the world in here. Do you want to hear some?”

Neo loved stories, so he sat down and listened. The ants told their stories of the veld and the forest, and of the mountains and the cities beyond.

“So many stories?” Neo asked.

“There are as many stories as there are stars in the sky,” the ants answered.

Neo waved goodbye, and went on his way across the veld. 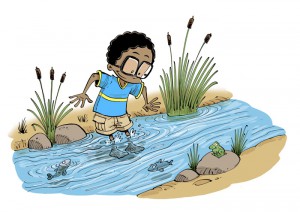 Neo thought how good that would be. So, he followed the river across the valley and between the mountains. Together, they wandered through the afternoon and almost into night, until at last, Neo reached a hilltop.

From there, he could see a little town, washed clean by the rains and gleaming in the light of the setting sun. 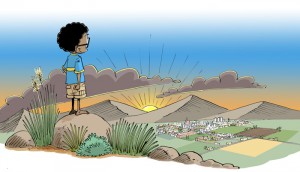 Then the river gurgled gently, “Go on, go home. There are people who love you there, waiting to share stories with you.”

At last, Neo peered through a window where an old gogo, with strong arms and twiggy hair like the branches of a big tree, closed a book and bent to kiss her little boy goodnight. 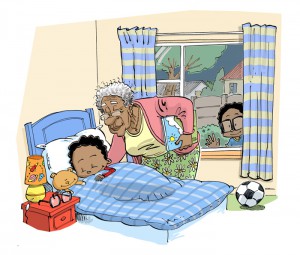 Neo thought about the veld and the tree and the ants and the river. And as he watched the gogo, a rainbow lit up the little house in colours so bright it looked like a picture in a storybook. Neo thought of his great adventure inside the pages of Gogo’s favourite storybook, and he thought of her and Mbali and home.

So, Neo slipped through the book, into his warm bed, in his cosy room, in his little house.

And that is why, whenever the world seems too grey, and his room seems too small, Neo opens a book. He steps through a door between the pages, and goes off into the big, wide world.

Together imagine and recreate a scene from the story using items in your environment. Make a life-sized version of the scene, or create a miniature scene in a shoebox.