Mini Meerkat’s pointy ears pricked up. “Where?” she asked. She loved foraging for food in exciting new places.

“Last week a tree blew over in the storm,” said Mama Meerkat. “Its trunk has made a bridge over the pool at the bottom of the koppie. Go down there, cross the tree bridge and see if you can find anything good for us to eat on the other side of the pool.” 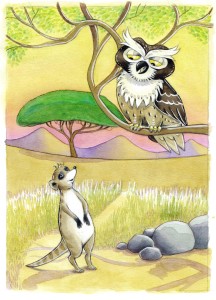 Off went Mini Meerkat. “I’m small, but I’m good at finding food!” she sang to herself as she scurried over the koppie towards the flatter land below. After a while, she saw Owl sitting sleepily in the branches of a tree. “Good morning, Owl,” said Mini Meerkat politely.

“Good morning,” said Owl in a faraway voice. “Where are you going, all by yourself?”

“I’m going to cross over the dark pool to look for food,” said Mini Meerkat proudly.

Mini Meerkat walked past a few more bushes and trees. Then she saw Jackal lounging in the shade of a big bush. “Well, well, it’s Mini Meerkat,” said Jackal in a friendly voice. “Where are you off to?”

“I’m going to look for food on the other side of the pool,” said Mini Meerkat.

“Hmm, be careful,” said Jackal. “You don’t have sharp teeth like I do!”

By now, Mini Meerkat could see the water of the pool glittering in the distance. She hurried on towards it. After a while she met Rabbit. He was lolling in the long grass in the sunshine. “Good morning, Mini,” he drawled, as he chewed on a long blade of grass. “Where are you rushing off to?”

“I’m going to cross over the pool and look for food on the other side,” explained Mini Meerkat.

“What is IT?” asked Mini Meerkat in a small voice.

“You know,” said Rabbit, “The THING that lives in the pool!”

“I’m not scared!” said Mini Meerkat, and off she went again. But as she drew closer to the pool, she began to wish she hadn’t met Rabbit. What was IT, and what would IT do to her?

At last she reached the tree bridge. “I won’t look down,” she said to herself. Briskly, she hopped up onto the trunk and began to make her away along it. But when she reached the middle, she couldn’t resist peering into the dark water … and there IT was! A face peering back at her! Mini Meerkat didn’t want to show how scared she was, so she pulled an ugly face … but to her horror, the THING made an ugly face too!

With her heart thumping, Mini Meerkat turned and raced back towards her home. She rushed past Rabbit, who was fast asleep, but stopped when she reached Jackal. “Help!” she panted, “there’s a THING in the pool! What shall I do?”

“Don’t worry,” said Jackal, “take a big stone with you and show it to the THING! That will frighten it away!”

So Mini Meerkat picked up a big stone and returned to the pool. But when she got to the middle of the tree bridge and looked down at the THING, it was holding a stone too!

She dropped the stone and rushed back along the tree bridge, past Rabbit and Jackal, until she reached the foot of the tree in which Owl was snoozing. “Owl, Owl!” she called in a squeaky, scared voice. “Help me! There’s a THING in the pool! What shall I do?”

“Hmmmm,” said Owl thoughtfully. “Take a stick with you and show it to the THING! That will do the trick!” he said.

So Mini Meerkat found herself a big, long stick, and feeling much calmer, she returned to the tree bridge. But when she held the stick in the air and looked down at the water, she saw that the THING was holding a big stick too! 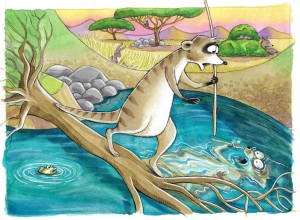 Terrified, Mini Meerkat tossed the stick into the water, and ran panting past Rabbit, Jackal and Owl, all the way up the koppie to her own home. Exhausted she fell on the ground beside Mama Meerkat and told her what had happened.

“Poor little Mini,” said Mama Meerkat in a soothing voice. “Don’t worry! I know exactly what you need to do. After you’ve had a rest, go back down to the pool. Don’t take any sticks or stones with you. When you get to the middle of the tree bridge, look down at the water again, but this time, when you see the THING, smile at it!”

“Smile?” asked Mini Meerkat surprised. She could hardly believe what her mother was saying.

“Yes, smile,” said Mama Meerkat. “I promise it will work.”

Of course Mama Meerkat was right. When Mini reached the middle of the tree bridge, she looked down and smiled. To her great surprise, the THING smiled back at her in the friendliest possible way! Mini Meerkat waved at the THING and it waved back at her. Mini was thrilled! She skipped across the tree bridge, and after several happy hours, returned home with a pile of delicious roots tucked under each arm.

That evening, as the meerkats sat down to eat their tasty feast, Mini Meerkat told Mama what had happened. “When I smiled at the thing, it smiled back at me!” she said.

“And when I waved at the THING, it waved at me too!” said Mini Meerkat.

“I think it wants to be my friend!” said Mini.

Mini Meerkat thought for a while. “But Mama,” she said, “what is the THING?” So Mama Meerkat told her. What do you think Mama Meerkat said?