There is a land far, far away called China. Once upon a time, in this far-away land there lived a young boy named Ho. Ho was poor, but very kind. He worked hard to earn enough money to buy food.

Even though Ho was poor, he helped other people whenever he could. Ho also loved to paint and he painted whenever he had time.

One night, he dreamed that an old man gave him a magic paintbrush.

“You have a kind heart,” said the old man in his dream. “I see that you love to paint. Here is a magic paintbrush. I want you to promise to use it to help people.”

When Ho woke up, he found the magic paintbrush next to him.

From that day on, he used the paintbrush whenever people needed help.

“Ho,” called the people in the fields. “There is no more water in our well. We need to water our plants.”

So Ho painted a river for them. As he painted, the river magically appeared and the people could water their plants. 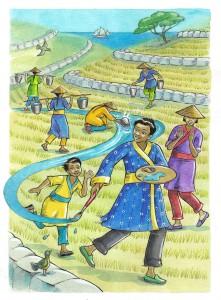 Then Ho saw that the people were struggling to till the land, so he painted a cow and a plough to help them. Every time he saw that someone needed help, he used his paintbrush. Soon many people knew about Ho and his magic paintbrush.

Some time later, a rich man heard about the paintbrush. “That paintbrush will be mine,” he said and planned how he was going to steal it. “I will make so much money that I will be the richest man in the whole land.” The next day he sent for Ho.

“I want you to look after my cows today,” he said. “This evening I will pay you well.”

Ho was happy and looked after the rich man’s cows. But in the evening, instead of being paid, he was thrown into prison and his magic paintbrush was taken away.

“He stole one of my cows,” lied the rich man. “This brush will pay for what he has done.” At last, he thought, the magic paintbrush is mine.

The rich man invited all his friends to come to his home. “Sit down and watch this,” he said. He then painted lots of pictures with the magic paintbrush. Everyone waited and waited …. and waited, but not a single picture came to life.

“What is going on?” shouted the rich man. “Go and get Ho and bring him here!”

Ho was brought to the rich man. But by now Ho knew that this man was selfish and cruel.

“If you paint some pictures for me,” said the rich man, “and they turn to life, I will pay you and set you free.”

“The first thing I want you to paint is a HUGE mountain made of gold,” said the rich man. “I want to collect all the gold.”

Ho picked up his magic paintbrush and painted a sea. This made the rich man angry.

“Why did you paint a sea? I don’t want a sea. I want a mountain made of gold. Now hurry up and paint it.”

So Ho painted a mountain made of gold on the other side of the sea. “You will have to cross the sea to get there,” he said.

“Then quickly paint a big ship so that I can cross the sea,” said the rich man.

Ho smiled and painted a big ship. He had hardly finished when the rich man jumped into the ship. Quickly his family and friends jumped in too and they sailed away.

Ho watched them carefully. He waited until the ship had sailed into the middle of the sea, then he painted a big wave. The wave rushed towards the ship. When it was close – CRASH! − it covered the ship and broke it into a thousand pieces. 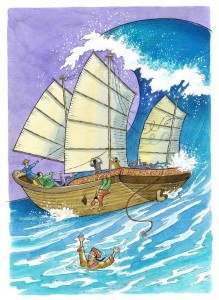 After that, Ho lived happily. He had enough food to eat. He helped people when they needed it and he painted as many pictures as he liked.

Sometimes he would look across the sea at the mountain made of gold. No one ever went there because there was nothing there except gold. Well … nothing except gold, broken pieces of a ship and a very angry rich man, his family and all his friends.