Lwazi and the go-kart

One day Lwazi found an old push chair in the empty field near his home. It was broken, but it had four good wheels. He took them off and looked at them. “I wonder what I should make,” he thought. “I know, I’ll make a go-kart.” 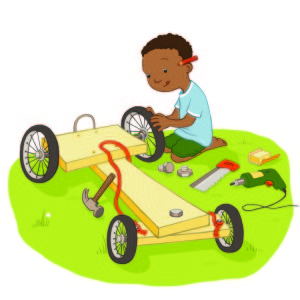 e went to the carpenter. “Please, Sir, do you have some old wood for me?”

The carpenter went to his wood pile and found Lwazi three old planks. “Here you are,” he said. “Be careful now. Don’t get a splinter.”

Now Lwazi had four wheels and three planks, but he needed some rope.

So off he went to the harbour. There was Mr Smit, the fisherman, offloading snoek from his boat. “Mr Smit, do you have some old rope for me, please?”

“Here you are,” said the fisherman. “Two metres. Be careful when you cut it. Don’t cut your finger by mistake.”

Now Lwazi had four wheels, three planks of wood and two metres of rope, but he needed some bolts.

So off he went to the mechanic at Granville’s Garage. “Please, Sir, may I have some nuts and bolts?”

“Here you are,” said the mechanic. “Be careful now. Don’t hurt yourself when you drill the holes.”

Now Lwazi had four wheels, three planks of wood, two metres of rope, and a handful of nuts and bolts. Off he went to his uncle’s house. Uncle Rodney had a nice big yard, and Lwazi set to work.

All morning Lwazi sawed and hammered, and hammered and drilled, and drilled and sawed. When afternoon came he was very tired, but his go-kart wasn’t finished. He still needed to sand it smooth so he didn’t get a splinter.
[a/w01]

“What are you making?” asked his cousin, Lulu, coming outside.

“Can I have a ride on it when it’s finished?” asked Lulu.

“If you help me sand it,” Lwazi answered.

So Lulu took the sandpaper and began to make the sides nice and smooth.

Lwazi’s two friends Ismail and McKenzie came by on their way to the shop. “What are you making?” they asked.

“Can we have a turn when it’s finished?”

“If you help us,” they answered.

So the boys took more sandpaper and made the inside, the front and the back nice and smooth. At last the go-kart was finished.

“I’m having the first ride,” said Lwazi, dragging the go-kart to the top of the hill.

“And us,” said Ismail and McKenzie. “You said we could all ride in it.”

“We all want our turns!” shouted Lulu and Ismail and McKenzie.

So when they reached the top of the hill they all piled on – Lulu and Ismail and McKenzie all sitting on top of the go-kart and holding on tight. “Here we go!” shouted Lwazi, giving the go-kart a shove and jumping on the back.

Faster and faster they went, rattling and rumbling and screaming and laughing until suddenly Lulu shouted, “Hey, there’s the vlei! How do we make it stop?”

The go-kart hit the wire fence, and the children flew over the fence and into the vlei. 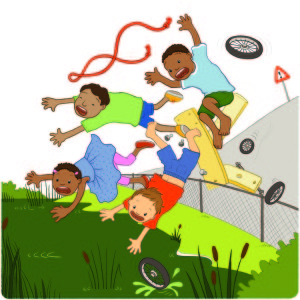 “Oh, oh, oh, my backside hurts!” screeched Lulu staggering out of the vlei.

“Has he drowned?” cried Ismail and McKenzie.

“Here I am!” said Lwazi looking over the fence. “Just look at the poor go-kart!” On the side of the road lay four wheels, three planks, two metres of rope and a pile of nuts and bolts.

“Oh dear,” said Lwazi. “We’ll have to start all over again.”

“And this time” said Lulu rubbing her behind, “please remember to add some brakes.”