At the foot of the green hills of Mpumalanga there was a farm. In a field on this farm, Kamuzu the horse always grazed quietly. All the farm animals were friends. They had lots to say to each other, but Kamuzu was shy. He wanted to talk to them, but he could never get the words out. This made him feel lonely and sad.

Early one morning, Kamuzu wanted to say “good morning” to Baas, his donkey friend. He opened his mouth … but nothing happened. His big, horsey voice was missing.

“What’s going on?” asked Kamuzu. “I can only whisper.” He tried again.

“What did you say?” asked Baas as he chewed the grass, licked his hairy donkey lips and stared at Kamuzu. The only reason he asked was because although Kamuzu opened his mouth, only a soft whisper came out. It was odd.

“Lost your voice? But you never say anything anyway, so how did you lose it?” asked Baas. “Don’t worry. I’ll look for your voice on the other side of the river.”

So Baas clip-clopped his way over the river to the other side. But, as soon as he got there and smelt the sweet grass, he forgot all about looking for Kamuzu’s voice and started chomping on the grass.

Back on the other side of the river, Kamuzu was thinking about ways to find his lost voice. “I’ll go down to the pond,” he thought. “I’ll open my mouth, lift up my tongue and ask the fish if they can see my voice under it.”

Kamuzu stopped at the pond and opened his mouth. The fish looked up at him. 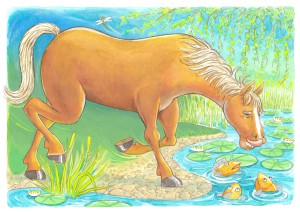 “No, Kamuzu, sorry, there is nothing under your tongue. But, don’t worry, we will look under the lily pads and between the pebbles at the bottom of the pond for your voice.”

The fish swam away, but the minute they were under the lily pads, they found such scrumptious food to eat that they forgot all about Kamuzu’s lost voice.

Kamuzu sighed sadly and walked on. He looked everywhere for his voice as he trot-trot-trotted along. Then he came across Snorkel, the pig, and Dozie, the black and white cow.

“What are you looking for?” asked Snorkel.

“Goodness! How did you manage that?” said Snorkel. “Never mind, I’ll help you look for it.”

“Me too!” said Dozie. “We’ll look in the grass on the other side of the river.”

Poor Kamuzu − the moment Snorkel and Dozie reached the sweet grass on the other side of the river, they stopped and crunched and munched and forgot all about helping him find his voice.

Kamuzu looked at his friends. “Nobody’s helping me. Nobody’s looking. Everyone is just munching, crunching, grazing, gobbling and eating,” he whispered sadly. He turned and started to walk back to the farm to continue his search on his own. Kamuzu looked under the bushes. He looked behind the shed. He looked up at the clouds and then he looked towards the hills.

“Oh no, there’s a storm coming! It’s already raining in the hills. That means the river is going to flood.” He turned and galloped back to the river. “I have to warn the animals. But I can only whisper, they’ll never hear me.”

He stood there for a minute and felt the first raindrops plip-plop on his back. The river was already muddy and rising. Everyone was still busy munching, crunching, grazing, gobbling and eating.

Kamuzu opened his mouth, but nothing happened. Not even a whisper came out. Now he was really scared. He had to do something. If his friends tried to cross the river, they would all drown. He tossed his head, shook his mane and stamped the ground with his hooves. None of his friends noticed him. The waters in front of him raced and rushed.

Just then it started to rain harder. All the animals looked up and started to run towards the river. 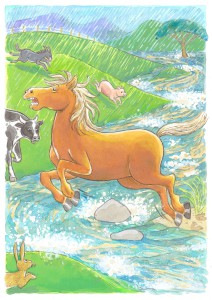 The animals were shocked. They had never heard such a big, loud voice come out of Kamuzu’s mouth.

Everyone ran to the rocks to shelter from the rain. They huddled together.

“You found your voice,” said Snorkel.

“Yes,” said Dozie, “it’s nice to hear you. You were always so quiet, we thought you just didn’t want to talk to us.”

“But we’re friends,” said the rabbits. “You don’t have to be shy with us.”

“From now on,” said Baas, “we want to hear you speak. Promise you will?”

And, Kamuzu, the horse, lifted his head to the sky and shouted, “YES! YES! YES, I PROMISE!”