It started with a puppy...

“Yes, please,” said Afrika who was sitting on Gogo’s lap.

Gogo laughed. “Okay,” she said, “let me tell you the story of how you became friends. Did you know that it all started with a puppy?”

Neo nodded. Bella smiled and said, “Tell us, tell us.” And so Gogo began to tell the story.

One night, not too long ago, a puppy was wandering around sniffing at each dustbin he came across. He was hungry and he was lost. He didn’t know where he was going, but he did know that his tummy was empty and he needed food! 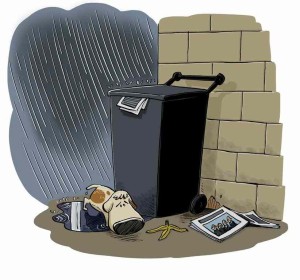 But there was no food near the dustbins. The puppy whined softly. He needed to eat and find a warm place to sleep. He walked down the street. There were many houses but some of them had big dogs that barked at him and showed their teeth. He was very scared.

Then, near the end of the street, he saw a little house that had no big dogs in the garden. The lights were on inside and it looked warm and friendly, so the puppy walked towards it.

As he got closer a wonderful smell reached his nose. The front door was open and he could see inside. He saw a little girl reading a book. She laughed to herself as she looked at the pictures.

“Supper time,” the puppy heard a soft, friendly voice call. He watched as the girl’s mother put a plate of noodles on the table. “I’ll fetch my plate and the sauce. Wash your hands quickly,” the woman said as she walked back towards the kitchen. The little girl rushed to the bathroom.

That was the moment the puppy had been waiting for. He dashed inside, jumped on the chair, buried his face in the plate of warm, yummy noodles and ate every single one of them. Then, just as quickly, he ran out the open door to hide outside. 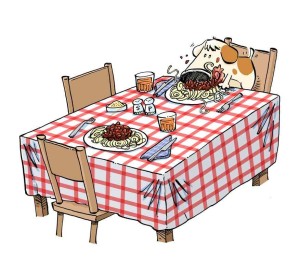 “But Mom,” called the little girl as she sat down at the table, “there’s no food on my plate.”

“WHAT?” Her mother rushed back into the room. “But I just dished some up.” She turned to look at the open door. “Oh no,” she said, “something or someone has come in and stolen your food.” She shut the front door and locked it.

Meanwhile the puppy had run round into the back garden. He found the kitchen door open and crept inside. The whole room was filled with the wonderful smell of food. There on the kitchen table was a big pot and another plate of noodles. The puppy again jumped onto a chair and once again put his face into the plate and started to eat.

Just then the little girl and her mother came into the kitchen.

The puppy was so scared; he crept into a corner and whined.

“What are we going to do with you? You are VERY dirty,” said the woman.

“Ooo,” said the little girl, “and your mouth is still full of noodles!”

“Close the door,” said her mother. “We’ll eat first and then we’ll wash him.” And that’s what they did.

“Now,” said Gogo, “who can guess what they named the puppy?”

“Yes,” said Gogo. “And do you know who the people in the story were?”

“Bella and her mom,” shouted Afrika.

“But that’s not the end of the story,” said Gogo. “Bella had to find out if the puppy belonged to anyone. Only if she could not find the owner, could she keep the puppy. So, the next day Bella and her mom went from door to door asking everyone if the puppy was theirs. But no one had seen it before. On her way Bella met Mme wa Afrika and …” 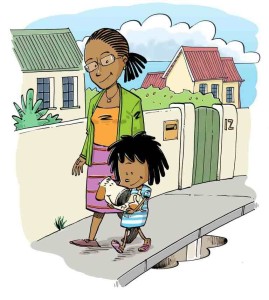 “Yes,” said Gogo, “and so you all met Noodle. And that is how you all became friends and Noodle became Bella’s dog, because nobody owned him.”

“And he’s the best dog in the world,” said Bella.

“And we’re the best friends in the world,” said Neo.