A long time ago, a woman lived with her family in a village in the Kingdom of Zululand. Every Sunday the family went down to the big ocean. The children dug in the sand and played in the waves. The woman made food over a fire while her husband looked for wood washed up by the sea to carve beautiful things: birds, people and all kinds of animals. 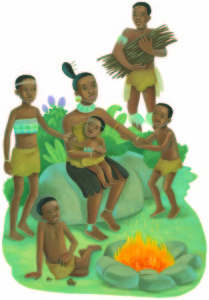 During the week the whole family worked hard and in the evenings they sat around the fire. It was too dark for working or playing or carving and it was too early to go to sleep. And this was when the children asked their mother to tell them a story.

“Mama,” they begged, “we want stories. Please tell us one.”

But no matter how hard she tried to think of a story, she could not. Neither she nor her husband had any stories to tell.

One day, the woman decided to ask her neighbours for help.

Her husband suggested, “Wife, I think you must go look for stories. I will take care of our children and the house. Find some stories and bring them back.” 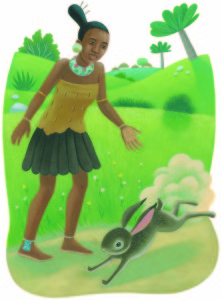 So the woman kissed her family goodbye and left. She decided to ask every creature she passed if they had a story to share. The first animal she met was the hare. He came thump-thumping along on his big feet.

“Stories?” asked Hare. “Oh, I have hundreds, thousands, no … millions of them.”

“Hare, please give me some stories so that I can make my children happy.” “Ummm…” said Hare. “I don’t have the time. In any case … stories in the daytime? …No!” And thump, thump, thump off he went.

Later she saw an owl. When she asked him for stories he fluffed his feathers angrily.

“Whooo … are … yooou to wake me? I have no stories. Go to the great fish eagle. He is the one who is awake in the day. Ask him.” 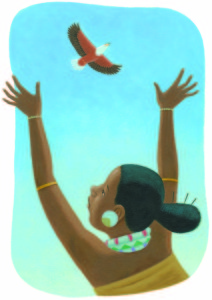 So the woman walked to the mouth of the Tugela River where the fish eagle hunted. When she saw him she called his name.

The great fish eagle screeched back at her. “KOW! kow-kow-kow! Why are you disturbing my hunting?”

“Oh, wise Fish Eagle,” said the woman, “I’m searching for stories. Do you know where I can find some?”

“Yes,” said Fish Eagle, “I know who can help you. Go to where the rocks join the sea. Stand there and call for the giant sea turtle.”

The woman thanked him and went down to the sea. She had only called for the giant sea turtle twice when he rose up through the water with a great splash.

“Don’t be afraid,” Sea Turtle said. “Hold onto my shell. I will take you to the sea people who know all things and all stories.” 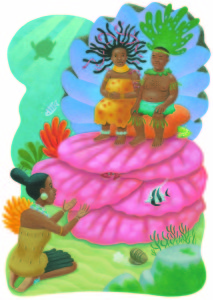 Down, down, down they went into the sea, right to the bottom, straight to the king and queen of the sea.

“And who is this?” asked the king.

“This is a woman from the dry lands above our waters,” whispered the queen.

“What is it that you want, woman of the dry lands?” asked the queen.

“Stories, your Highness. Do you have any that I can take to my people?”

“We do,” said the queen. “But do you have something to exchange for these stories?”

The king and queen smiled. “We cannot go up to your dry lands. We would like to see what it is like. Bring us something to show us what kind of animals and people there are.” 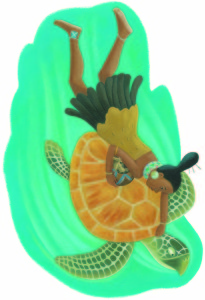 The giant sea turtle took her back to the dry land and waited while she rushed home to tell her husband everything.

“Oh,” he said excitedly. “I have many carvings of animals, birds and people. You can take them all.”

Soon the woman was back at the beach with a bundle of the carvings. Once again the turtle dived and took them down, down, down.

When the king and queen saw the carvings, they were very happy and they gave her a beautiful shell.

“For you and for your people, we give the gift of stories. Whenever you want a story, hold this up to your ear and listen,” they said.

“But remember this,” whispered the king in her ear, “your very first story began with your journey down here.” 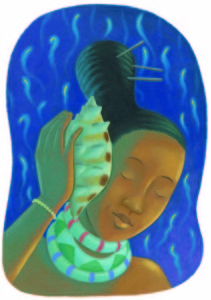 When at last the woman returned to the shore, her husband, her children and all the people of the village were waiting. They had made an enormous fire that crackled and spat in the darkness.

The woman smiled. She held the shell and said, “Yes … Nal’ibali … here is the story. Ssshhh. Now listen.”

And that was how the first story was told. After that the woman held the shell to her ear and told more and more stories.

And if this is the first story that you have heard, just remember, there are many, many more to come.