Many years ago there was a hare that could run faster than any other animal on the farm. He was very, very proud that he could run so fast. He could not help reminding the other animals what a fine runner he was.

“I am faster than the wind,” he boasted again and again to his friend, Hedgehog.

One morning Hare and Hedgehog met at the gate leading to a field on the farm. It did not take Hare long to boast, “I am the best runner in the world. I am faster than the wind.” 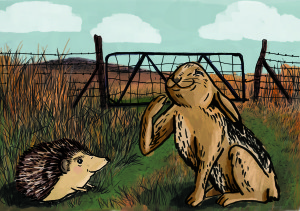 “I don’t think so,” said Hedgehog firmly. “I think even I could run faster than you.”

“A slowcoach like you?” Hare laughed nastily. “You don’t have a hope of running faster than me.”

Hedgehog thought for a bit. Then he spoke quietly, “All right. Let’s see who’s faster. We can race against each other tomorrow. We will run from this gate to the bottom of the field and back again.”

“You’ll see,” said Hedgehog. “You don’t have to have long legs to win a race, you know. I’ll meet you at this gate tomorrow, just after sunrise. I will win the race. You must promise me that when I do you will never call me Short Legs or Slowcoach again.”

“All right,” agreed Hare, very sure of himself. “If you really want to race me, you can. I promise I will not call you Slowcoach or Short Legs − IF you win. Of course, that’s never going to happen. I am faster than the wind. I will get to the bottom of the field and back while you are still thinking about starting. Then I will be able to call you Short Legs or Slowcoach as often as I like. Ha! Ha!”

Hedgehog told his older brother about the race, “Oh dear,” said his brother, “you have made a terrible mistake. Whatever made you take on something so impossible? Hare is faster than the wind. Now he will be able to call you Slowcoach and Short Legs for the rest of your life.”

“Don’t worry,” said Hedgehog. “I have a plan. A very clever plan. If you help me, we can teach Hare a lesson. He will have to stop boasting − and he will never be able to call me Slowcoach or Short Legs again!”

The next day Hedgehog got to the gate long before Hare. As usual, it took Hedgehog a long time to get there, but he was waiting with a smile on his face when Hare bounded up just before the sun peeped over the hill.

“Good morning, Short Legs. Are you sure you still want to race me? You know you haven’t the slightest chance of winning. Are you ready to be beaten? Remember, I can run faster than the wind,” said Hare.

Hare was so sure that he was going to win that he had even been thinking up some new names to call Hedgehog after the race. This was going to be fun.

Hedgehog just smiled quietly. He stood calmly waiting at the starting line. “Let’s just make sure of the rules,” he said. “We’re going to race to the bottom of the field, and then back to this gate, right?”

“Yes,” said Hare. Then he shouted, “Ready! Steady! Go!” and bounded away as fast as he could.

As he got near to the bottom of the field, he couldn’t help chuckling to himself. “Hedgehog is probably still trying to get started. Oh, he is such a slowcoach.” 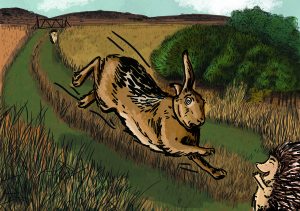 Imagine his surprise, then, when Hedgehog popped up cheerfully at the bottom of the field and cried out, “Got here before you!”

Hare stopped for a moment. Then he turned and ran back faster than he had ever run before. He didn’t usually puff and pant, but he was puffing and panting and sweating by the time he touched the gate. He looked over his shoulder. There was no sign of Hedgehog. This time, he was sure he had won. Then a happy voice came from the other side of the gate. “Once again, I got here before you!” It was impossible! But there was Hedgehog, smiling sweetly at him.

Hare could not believe his eyes. Hedgehog had beaten him. He turned away and walked slowly home with his head hanging down.

Hare never boasted again – at least not to Hedgehog. He became a much nicer friend. He never called Hedgehog nasty names again. And he never found out how Hedgehog had won the race.