Papa Smuts was a fisherman. But, fish were not as plentiful as they used to be and some days he came home empty handed. Then poor Papa Smuts would feel really downhearted.

That’s when Mama Smuts would give him a big hug and say, “We’ll make ends meet.” And Sannie and Frikkie would add, “We always do, Papa.” And somehow they always did because …

… no one could grow redder tomatoes, greener peppers, crunchier carrots and crispier cabbage than Papa Smuts, with the help of Sannie and Frikkie. 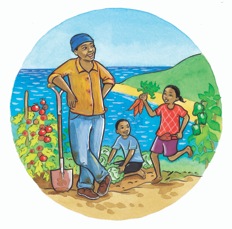 And no one, absolutely no one, could turn the reddest tomatoes, the greenest peppers, the crunchiest carrots and the crispiest cabbage into a more scrumptious meal than Mama Smuts, with the help of Sannie and Frikkie!

One lucky day, Papa Smuts caught five fish. He sold four and kept one to take home for dinner.

As Papa Smuts passed Maria’s farm stall she called out, “How much for the fish?”

“Sorry, Maria,” said Papa Smuts, “but this one is for our dinner.”

“What if,” asked Maria, “you took something different home, something like these sausages? Now wouldn’t that be a real treat?”

There was such excitement when Papa Smuts told Mama Smuts, Sannie and Frikkie about his lucky day. It was as if he had brought home treasure and, in a way, he had.

Mama Smuts laid out the plump, pink sausages on her prettiest plate and put them in the cupboard. She knew exactly what she would make with them. It was to be her best-ever Chakalaka and then, at the last minute, she would cut up the sausages and stir them in. That way, they would seem to go further.

Mama Smuts chopped and sliced, diced and spiced, with the help of Sannie and Frikkie.

Then, while Mama Smuts added a little bit of this and quite a lot of that, Sannie and Frikkie helped Papa Smuts set the table and pick a bunch of wild flowers to go on it. 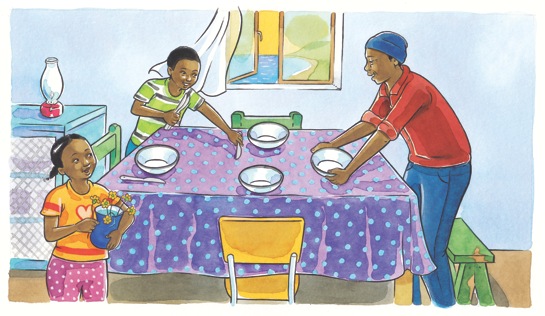 And then, at last, it was dinnertime. And what a dinner!

And, “My, oh my . . . oh my!” said Papa Smuts, “I did not think it was possible, but this Chakalaka is better than your best. Those sausages made all the difference!”

Mama Smuts said nothing. But, if Papa Smuts, Sannie and Frikkie had not been so busy tucking into seconds they might have heard her let out a little gasp.

Mama Smuts went quietly over to the kitchen cupboard. She covered up the plump, pink sausages and wondered how she could possibly have forgotten them.

But then she thought, “Sausages for breakfast. What a treat!” 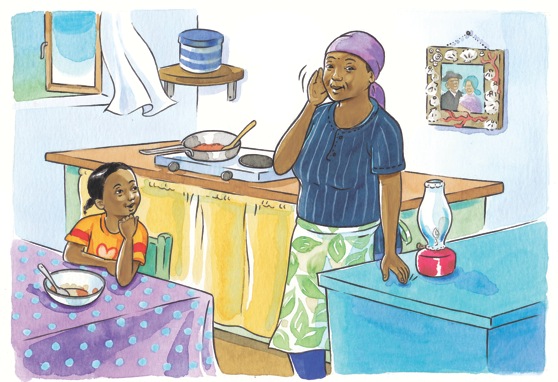