The boy and the jackal

There was once a young boy who lived on a farm near a village. He lived with his mother, father and sister. Everybody in his family had their own special job to do. His job was to look after the sheep.

Every morning he took the sheep out into the veld. There the sheep ate the grass and plants. He watched them all day.

There were rocks and bushes at the end of the veld. That was where the jackals lived, but the boy made sure that his sheep did not go close to the rocks. Every evening he took the sheep back to the farm so that they would be safe. 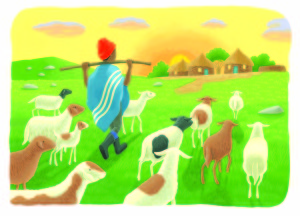 While the boy went out with the sheep, his sister went to the village to sell vegetables and eggs from their farm. At the market she spoke to everyone.

“My sister always has people to talk to,” said the young boy one day. “She has so many friends and I have none. I am out here, all alone, every day. I never have anyone to talk to.” He looked at his sheep and sighed.

After thinking about this for a long time he came up with a plan. “I know what I will do,” he said. “I will cry ‘Jackal!’ Everyone will come to help me. Then I can say the jackal went back into the bushes. I will help them search. Then I will have someone to talk to. We’ll talk about sheep and jackals and other things.”

So one day he tried out his plan. He started to shout and ran down to the village.

The people heard him shouting and ran to help. They came with sticks and stones; with brooms and spades. They came with anything they could find to help chase the jackal away.

Of course, there was no jackal. The boy had lied. But the people did not know this. After searching for a while, some of the people stayed to talk to the boy. This made him very happy.

“I think I will do that again,” he said when everyone had left. “It was so good to have people to talk to.”

When he took the sheep home that night, his family had heard all about him shouting for help and they begged him to tell them what had happened.

“I heard it from the baker,” said his father.

“I was in the village and saw the people running to help,” said his mother.

“Were you scared?” asked his sister.

So the boy told them all about the jackal, and the lie grew bigger and bigger.

One week later the young boy did the same thing. He shouted and ran to the village. “Jackal! Help! Come quickly.”

Once again the villagers came running to help him. Once again they found no jackal. This time they wanted to know what was going on.

“We cannot see any tracks,” someone said.

“Your sheep do not look scared at all,” said someone else.

The villagers did not stay for long and grumbled to each other as they made their way home.

Then the day came when the boy did see a shape move near the rocks. He saw two pointed ears and a long tail. He saw the silver-black fur on its back. His heart thumped loudly. It was a jackal and it was sneaking closer and closer to his sheep. This time he really shouted loudly.

As he ran towards the village to find help, he saw the jackal bite one of his sheep. He turned and ran back to his flock, shouting all the time. But no one came to help.

Then the jackal grabbed a lamb and ran back into the bushes by the rocks. The sheep were so frightened that they all ran away. It took the boy hours to find them all and bring them home.

When at last he got home he complained loudly, “Nobody came to help me. I could have been hurt. One of the sheep is hurt and the jackal took one lamb. This time there really was a jackal and nobody listened when I shouted.”

“This time?” asked his father. “What do you mean this time?”

And the young boy had to tell the truth. His father was very angry.

“I will not punish you,” he said. “You will soon find out what happens to people who lie.”

“It is simple,” said his father. “Once people know that you have told lies, they will never, ever believe you again, even when you are telling the truth. Nobody trusts a liar.”

And that was punishment enough for the boy. Nobody in the village believed anything he said ever again.