The best street in the world

Long Street was wide and long. In summer, when Sonny and his friends walked home from school, their shoes were covered in dust. In winter, their shoes squished with mud and water. But during the school holidays, no one cared if the street was dusty or muddy.

Long Street was where Sonny and his friends played cricket. Everyone came outside to watch and no one complained if a ball went into their garden. No one that is, except for Mr Peterson.

“These holidays we’ll have the best cricket matches,” said Sonny as they walked home one afternoon.

“Thumi? What do you say?” asked Sonny.

“But what about HIM?” asked Thumi. He pointed to Mr Peterson’s house. “Jack has already broken one of his windows.”

“What about YOU?” said Jack. “You’ve already hit two balls into his garden.”

They knew that if they hit or threw a ball over Mr Peterson’s wall, they would never, ever see it again. If their ball rolled under the gate, it was his dog, Shikisha, who took it. They stared at Mr Peterson’s house. He had been in such a bad mood the last few months.

“Have we got a cricket ball? I thought he had them all,” said Thumi.

“I’ve got one,” said Jack and smiled, “so let’s plan the best cricket match EVER.”

On the last day of school, Sonny couldn’t wait to get back home to play cricket. He was so excited, he even waved at Mr Peterson, but Mr Peterson just ignored him.

“Hi, Mom,” he called as he came inside. His mother was reading the newspaper. She was excited.

“Hello, my boy,” she answered. “Listen to this. It’s wonderful. Long Street will now go all the way to the new shopping centre. At last there will be buses and bus stops. BUT …” she said, “this also means there will be no more playing in the street.”

“WHAAAT?” Sonny’s heart sank right down to his shoes. The match had already been planned! He walked back outside and sat on the front steps of the house grumbling. A loud noise made him look up. Mr Peterson was on a ladder, making his front wall higher by adding more bricks.

“Humph!” grunted Sonny crossly. “I know he wants to keep our balls from going over his wall, but he doesn’t have to bother now.”

Then he had an idea – if all his friends got together and asked all their parents, then … maybe … they could have one last cricket match. He rushed off to find Simon.

The following Saturday there was great excitement because Sonny and Simon’s plan had worked! Today was going to be their last match – the biggest, best cricket match EVER! All the children in the street were going to play. AND there would be prizes! Some of the parents were making snacks for everyone to share at lunchtime. Thumi’s Dad was going to hand out the prizes at the end of the day.

Even though it was all just for fun, Sonny felt a little nervous. The crowd cheered as the first ball was bowled by Thumi.

Jack stepped forward. THWACK! He hit the ball so hard that it went high up into the air.

Sonny moved forward to catch the ball, but the sun was shining straight into his eyes. He squinted, waited and moved under the ball. Everyone was cheering. As Sonny started to close his hands around the ball, it popped back out again. It bounced once and rolled straight under Mr Peterson’s gate. Sonny’s heart sank. 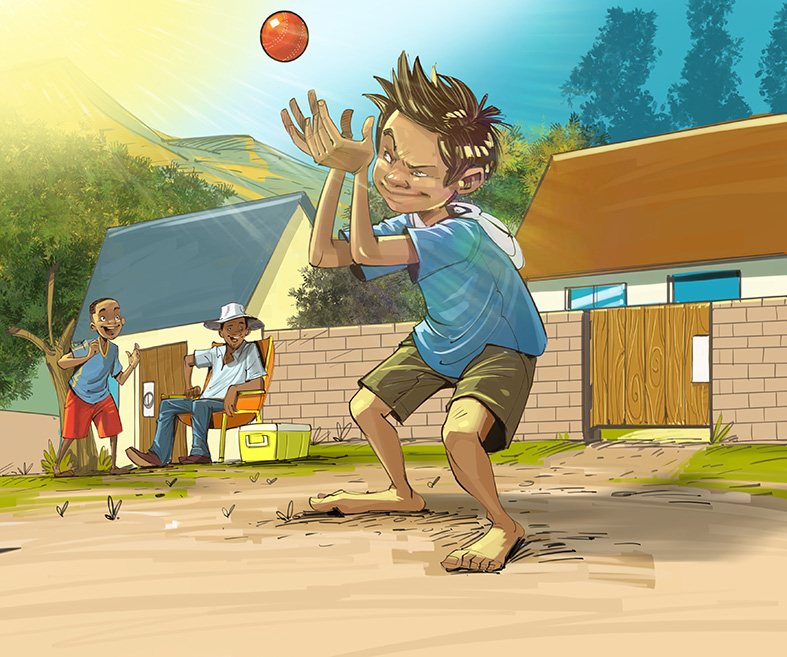 “NOW what will we do?” asked Thumi.

“We can’t carry on with our match!” said Jack.

“We’ll NEVER get the ball back!” wailed Simon.

“But Mr Peterson will shout at you,” said Thumi.

“He won’t let you get the ball … and Shikisha’s probably dug a hole and buried it already!” said Simon.

“Well, I just have to try,” said Sonny. “It’s our last match and we’ve only just started it. We won’t get another chance to play like this.”

Bravely, Sonny opened Mr Peterson’s gate and walked up the path. Shikisha was nowhere to be seen. Sonny’s tummy felt all squishy. He was a little scared. He did not want to be shouted at by Mr Peterson. Just before he got to the front door, it swung open. There stood Mr Peterson. He looked much bigger up close. His cheeks were red as if he was very, very angry. 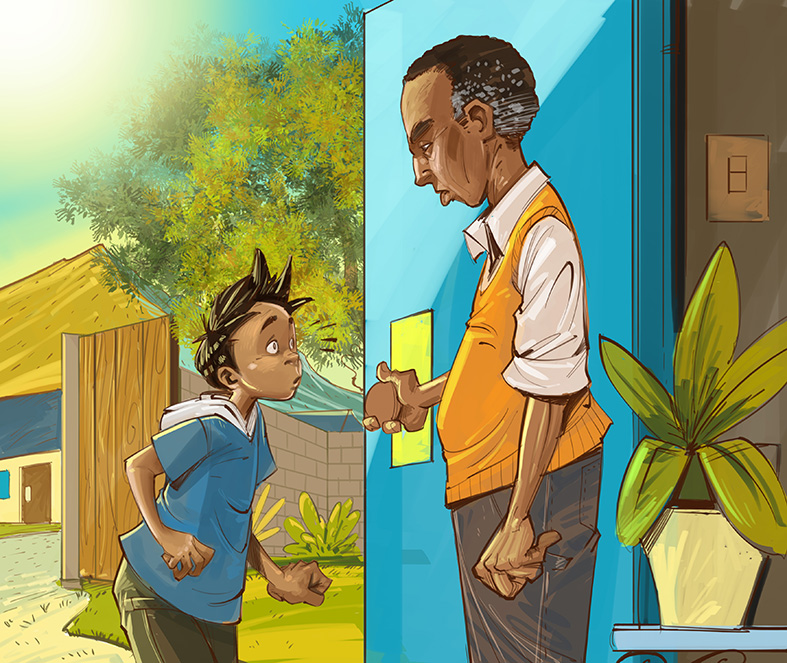 Just as Sonny was about to open his mouth, Mr Peterson said in a loud booming voice, “Sonny! It looks like I finished just in time.”

“Come,” said Mr Peterson and walked to his back garden.

Sonny looked up at Mr Peterson and smiled. Mr Peterson smiled back warmly. “I’m sorry I couldn’t warn you about the changes to the street. I work at the council, but I wasn’t allowed to say anything. BUT … I could do something.” He laughed. “NOW … get everyone to come over here and let’s play cricket.”

Now Sonny and his friends always have a place to play cricket. Mr Peterson loves it when they visit and enjoys watching all the matches. He is really good at keeping score. And when the ball gets hit or thrown a little too far away, Shikisha runs to fetch it!

Encourage your children to draw a picture of the cricket field in Mr Peterson’s back garden. Let them use the details in the story to help them. Suggest that they write the paragraph that describes this cricket field under their pictures.