Nkululeko and his mama and papa are tortoises. They live together at the bottom of a garden.

Now, tortoises don’t need houses like we do because they live in their shells. And the other thing you may know about tortoises, is that they are very, very slow. 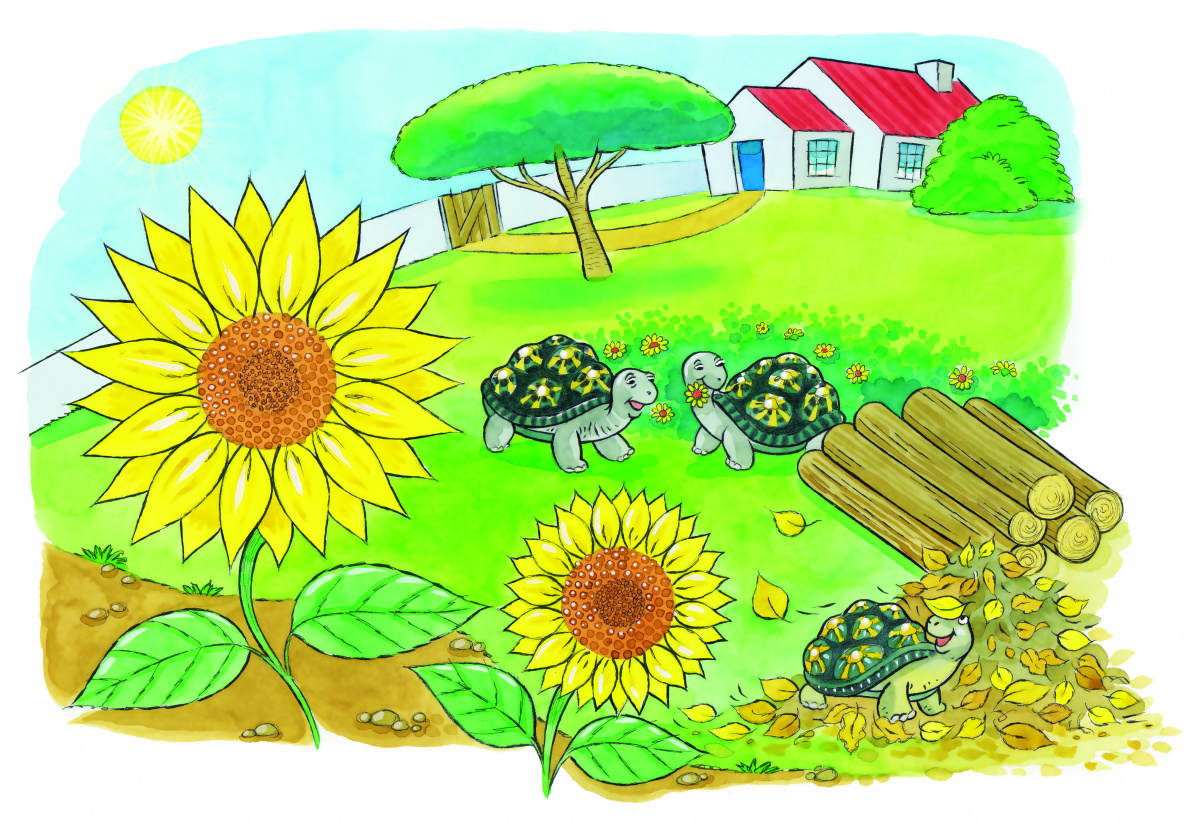 Every night, Nkululeko and his mama and papa go to bed very slowly by pulling their legs and heads inside their shells. And every morning, they wake up very slowly too. It is usually about ten o’clock when they finally pop out of their shells and have a delicious breakfast of flowers and leaves.

One morning Papa leaned over to Mama and said, “Isn’t it a lovely day to do nothing? It’s just a pity about Nkululeko, he’s always rushing about.”

Nkululeko was very fast for a tortoise. On this morning, he was exploring the bushes on the far side of the garden. His parents shook their heads, but Nkululeko was too busy playing in a big pile of crunchy leaves to notice.

Nkululeko saw something shiny in the leaf pile. It was a big gold coin. “It’s money!” he said with a smile. “I’m going to use it to go on an adventure.”

And so Nkululeko began to walk. He walked through the garden and across the lawn, until he came to the old gate that led onto the street. He crept underneath it.

The street was busy. He walked along the pavement and tried not to get trampled by all the people rushing about. He stopped at the corner and caught his breath. It was then that Nkululeko saw something wonderful.

In a small parking lot, big taxis were picking people up and driving off to what sounded like the most marvellous places – the city, the beach, the mountain. Nkululeko walked across the street to the parking lot.

He went up to the first big taxi and said in his quiet voice, “Hello, I’d like to see the city, or the beach, or even the mountain. Could you help me?”

The taxi driver was young and tall. He leaned down and looked at the little tortoise who was holding out a big gold coin. The driver laughed. “This tortoise wants a taxi. How silly!” he said. “Whoever heard of such a thing?”

Nkululeko dropped his head sadly and started to walk away. Just then, somebody spoke. “I’ll take you,” said the voice.

Nkululeko looked up and saw an old man standing in front of his taxi.

“Climb aboard, young tortoise,” said the old man, smiling, “and I’ll show you everything.”

Nkululeko smiled broadly and walked up to the taxi. The old man picked him up and put him on the seat.

Nkululeko strained his head to look out of the taxi’s window, but it was too high up for him. “Let’s just get you some cushions out of the boot so that you can sit up higher and see better,” said the old man.

And then they were off, driving through streets filled with hooting cars and people rushing about. The old man talked as he drove. He told Nkululeko that his name Bra Will, and that he had been driving taxis for fifty years.

Bra Will nodded. Outside, the houses were getting bigger. Bra Will said that they would soon be in the city.

“Why do you want to see all these places?” Bra Will asked.

“Well,” said Nkululeko, “tortoises move very slowly and sometimes I get bored just walking around the garden. I want adventure!”

There was a twinkle in Bra Will’s eye. “I understand,” he said.

The city was big and noisy. Skyscrapers climbed up into the clouds. There were people and cars everywhere and there seemed to be so much noise! 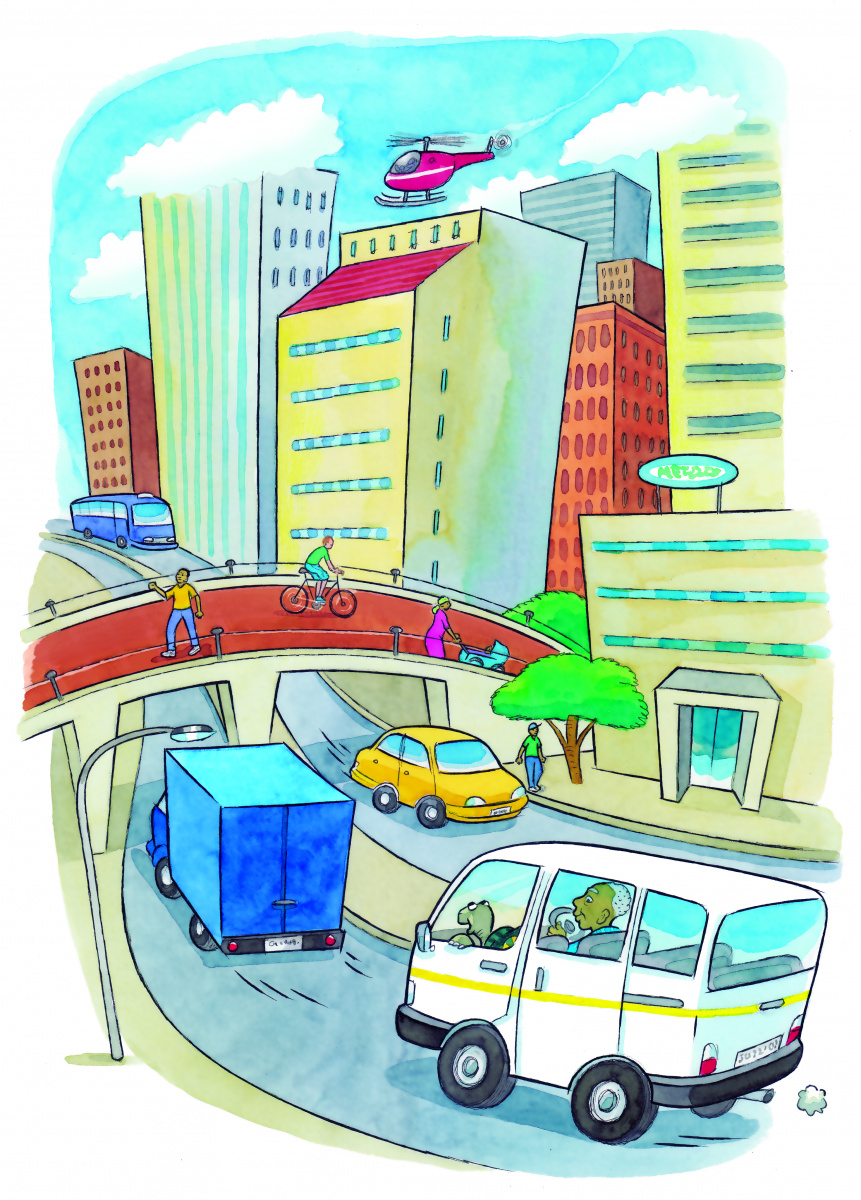 “This is amazing,” said Nkululeko.

“This is nothing,” said Bra Will, “wait until you see the beach. This city is too loud for me, but the beach, now that’s amazing.”

And so they left the city.

“Open the window,” said Bra Will, “then you will smell the sea.”

Nkululeko rolled the window down very slowly. “It smells all salty,” he said, smiling.

As they came around a corner something large and blue stretched before them. “What is that?” asked Nkululeko with his mouth hanging open.

The taxi pulled into a small parking lot next to a long stretch of white sand that ran down to the sea.

“And this is the beach,” said Bra Will. “Why don’t we stop here for a moment and walk on the soft sand.”

Bra Will helped Nkululeko onto the beach. Around him people were playing or lying in the sun. It was very hot. Nkululeko crawled around slowly, waded in the shallow water, and looked at all the pretty shells on the beach. 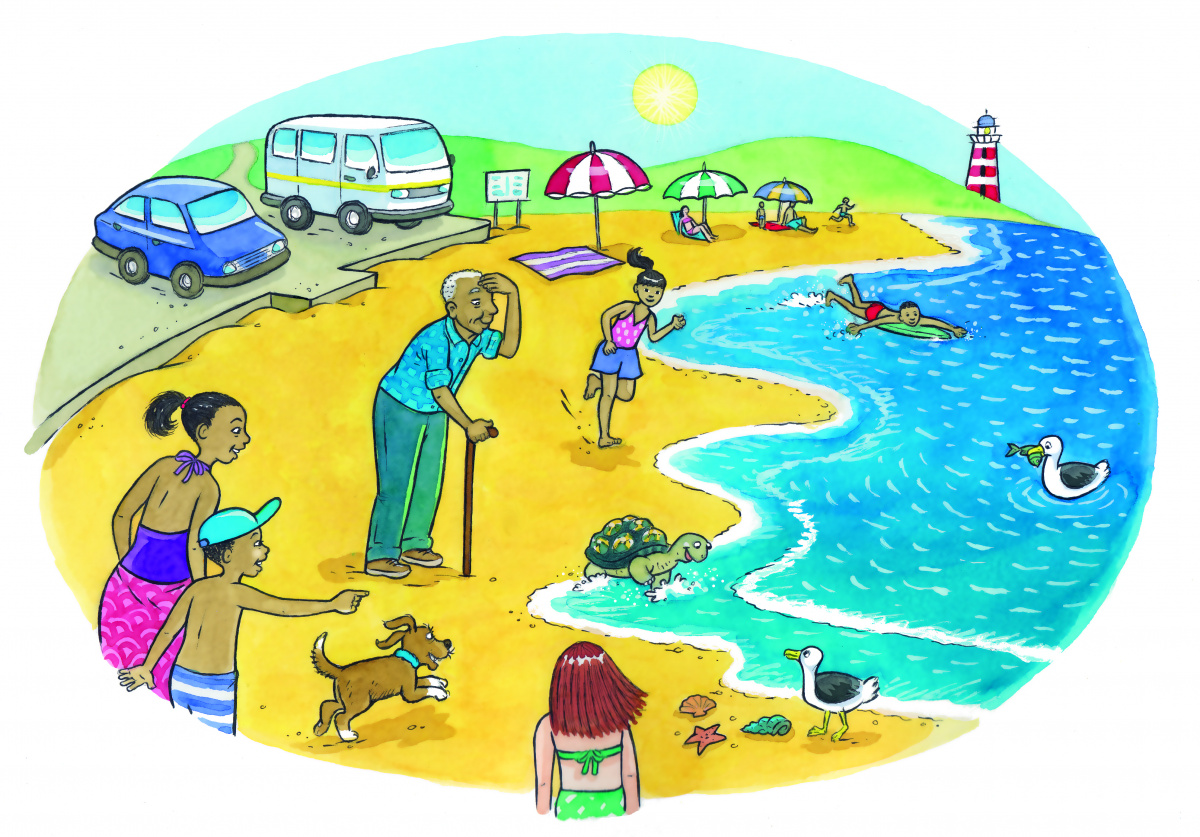 When the taxi finally stopped, Nkululeko climbed out and gasped. He could see the whole city from up here. He could see the sea and the beach and even his little home in the garden. He thought about his mama and papa.

“This is the most beautiful place, Bra Will,” said the tortoise, “and it has been such an adventure driving around with you, but I think it’s time I went home to my mama and papa.”

Bra Will winked and drove them back to the taxi rank. Nkululeko thanked him and pulled out the gold coin from his shell.

Bra Will shook his head and said, “You keep your money, Nkululeko. It was a pleasure to drive you around. Your happiness was payment enough for me.”

Nkululeko waved goodbye and started the slow walk home. On the way, he passed a fruit seller and used the gold coin to buy a box of ripe strawberries, which he carried home on his back. It was getting dark when he found his way into the garden. His mama and papa were waiting for him.

“Where have you been?” asked Papa. “We were worried sick.”

Nkululeko gave them each a big hug. They shared the strawberries and he told his parents all about his adventure in the taxi.

With that he tucked his head and legs into his shell and fell fast asleep.

Let your children use egg cartons, cardboard, paint and glue to make the tortoises in the story. They can use other scrap materials (like bottle tops and cereal or biscuit boxes) to make the taxi. Encourage them to use the story props they made to retell the story in their own way.

* Suggest that your children draw a map to show the places Nkululeko went to on his adventure and the order in which he visited them.